The U.S. Federal Trade Commission and the Department of Justice signed an antitrust memorandum of understanding (MOU) with the Korea Fair Trade Commission (KFTC) today to promote increased cooperation and communication among the competition agencies in both countries. The MOU was signed in Washington, D.C. by Chairwoman Edith Ramirez of the FTC, Assistant Attorney General Bill Baer of the Justice Department’s Antitrust Division, and Chairman Jeong Jae-chan of the KFTC, and went into effect upon signature. 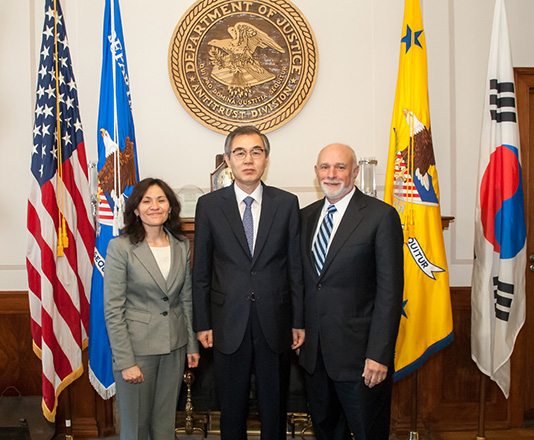 “This MOU marks an important point in our relationship with the KFTC, providing an opportunity to further strengthen our agencies’ interactions and solidify our cooperative efforts throughout Asia,” said Chairwoman Ramirez. “It will help us to work even more closely to promote convergence around sound competition policy and procedures.”

“This memorandum of understanding recognizes the day-to-day working relationship we already enjoy with the KFTC and expresses our interest in continuing and strengthening that relationship in the years to come,” said Assistant Attorney General Baer. “Enforcement cooperation – including candid and constructive dialogue – is critical to maintaining competitive markets in the U.S., Korea, and around the world.

The U.S. antitrust agencies and the KFTC have developed an increasingly close working relationship since Korea adopted its competition law in 1981, which includes exchanging views on policy and, as appropriate, cooperating on investigations. Today’s MOU is intended to further promote these relations.

The MOU with the KFTC is the U.S. antitrust agencies’ third antitrust cooperation arrangement in East Asia, following those reached with Japan in 1999 and the Chinese competition agencies in 2011.

The Commission vote authorizing Chairwoman Ramirez to sign the cooperation agreement was 4-0.