191 Actions Brought By FTC and Its Law Enforcement Partners
June 6, 2013 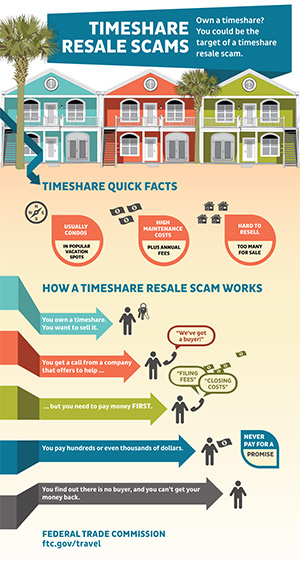 “Con artists take advantage of timeshare owners who have been in tough financial straits and are desperate to sell their timeshares,” Charles A. Harwood, Acting Director of the FTC’s Bureau of Consumer Protection, said during a press conference in Miami.  “They persuade owners to pay fat up-front fees by saying they have someone ready to buy the property, but that’s a lie.  Our message to timeshare owners is simple: never pay for a promise, get everything in writing first, and pay only after your unit is sold.  Our message to timeshare resale scammers is simple, too:  law enforcement agencies at every level of government are working together to put an end to this problem.”  He was joined by Florida Attorney General Pam Bondi; Wifredo A. Ferrer, U.S. Attorney for the Southern District of Florida; Jay Levenstein, Deputy Commissioner of the Florida Department of Agriculture and Consumer Services; and a victim of an unscrupulous timeshare resale operation.

“We cannot allow our elderly and vulnerable real property owners to continue to be the target of fraud schemes,” Ferrer said. “For that reason, our respective offices – federal and state, criminal and civil – have joined forces to combat Florida-based fraud schemes victimizing timeshare unit owners across the country.  These victims, many of them elderly or in financial distress, looked to sell their units to help make ends meet or pay other bills.  Instead, they were defrauded out of more than $14 million in total.  Such fraud will not be tolerated.”

Bondi said, “We will continue to pursue scam artists who attempt to essentially steal from timeshare owners, and the Timeshare Resale Accountability Act that I worked with the Legislature on in 2012 is already having a great effect on ending this type of fraud.  With strong partnerships among federal, state and local leaders, we will continue to protect Floridians.”

Fraudulent timeshare resellers lure consumers into paying hefty up-front fees, falsely claiming to have interested buyers ready to pay top dollar for the properties.  They claim sales are about to happen, but there are no buyers, and consumers lose hundreds or thousands of dollars.  Deceptive travel prize promoters trick consumers into paying for discounted or “free” vacation packages supposedly worth thousands of dollars, but most people get nothing of value or have to attend high-pressure timeshare sales presentations.  All of these scams reach consumers via unsolicited email, mailed travel vouchers, and radio, TV and online advertising.

To help people avoid these kinds of scams, the FTC has updated its consumer education materials on new and emerging travel and timeshare resale frauds at ftc.gov/travel, which includes an interactive travel fraud game.  The FTC also has a new infographic explaining how a timeshare resale scam works.

At the FTC’s request, federal courts blocked three operations [Resolution Trust order | Resort Property order | Vacation Communications order] that took more than $18 million from consumers throughout the country who were trying to sell their timeshare properties.  The courts halted the defendants’ allegedly deceptive practices and froze their assets pending litigation.

Resort Solution Trust Inc., Lincoln Renwick II, and Anthony Talavera, based in Florida, allegedly deceived thousands of consumers into paying advance fees ranging between $800 and $3,400.  Consumers did not receive what they were promised.  Instead, the defendants strung them along with more false promises and routinely denied their requests for refunds.  The defendants are charged with violating the FTC Act and the FTC’s Telemarketing Sales Rule (TSR), and with calling consumers whose phone numbers are on the National Do Not Call Registry.

The Commission vote authorizing the staff to file the complaint was 4-0.  It was filed in the U.S. District Court for the Middle District of Florida, Tampa Division.  On May 20, 2013, the court issued an order that halted the defendants’ deceptive practices, froze their assets, and put the company into a temporary receivership.  The Commission acknowledges the assistance of the Florida Attorney General’s Office, the Florida Department of Agriculture and Consumer Services, and the Better Business Bureau of West Florida.

Resort Property Depot, Inc. and Narendra “Nick” Patel, based in Florida, allegedly made unsolicited telemarketing calls to timeshare owners and tricked them into paying up-front fees ranging from $300 to $3,000.  Consumers’ timeshares were not rented or sold, and those who sought refunds were denied.  The defendants are charged with violating the FTC Act and the TSR.

The Commission vote authorizing the staff to file the complaint was 4-0.  It was filed in the U.S. District Court for the Middle District of Florida, Tampa Division.  On May 21, 2013, the court issued an order that halted the defendants’ deceptive practices, froze their assets, and put the company into temporary receivership.  The Commission acknowledges the assistance of the Florida Attorney General’s Office, the Florida Department of Agriculture and Consumer Services, and the Better Business Bureau of West Florida.

Vacation Communications Group LLC, Gardner Cline L.L.C., Mark Russell Gardner, Tammie Lynn Cline, and Sheldon Lee Cohen, doing business as Universal Timeshare Sales Associates and previously as M.G.M. Universal Timeshares, charged from $1,600 to $2,200 and reassured skeptical consumers, sometimes in writing, that a buyer was ready to close the sale.  As the promised closing date passed with no sale, the defendants became evasive, placing callers on hold indefinitely or claiming the buyers were having scheduling or financial problems.  They typically denied or ignored refund requests and often disputed chargebacks with consumers’ credit card companies, which often resulted in denial of those requests.  The defendants’ U.S. mailing addresses, including Beaverton, Oregon, and Reno, Nevada, were only mail drops; their operations were based in Sanford, Florida, and Santo Domingo, Dominican Republic.  The defendants are charged with violating the FTC Act, the TSR, the Florida Deceptive and Unfair Trade Practices Act, and the Florida Timeshare Resale Accountability Act, and with calling consumers with numbers listed on the National Do Not Call Registry.

The Commission vote authorizing the staff to file the complaint was 4-0.  It was filed jointly by the FTC and the Attorney General of Florida in the U.S. District Court for the Middle District of Florida, Orlando Division.  On May 20, 2013, the court issued an order that halted the defendants’ deceptive practices, froze their U.S. assets, and put the company into temporary receivership.  The Commission and the Attorney General of Florida acknowledge the assistance of the Oregon Department of Justice, the Oregon Real Estate Agency, the Dominican Republic Instituto Nacional de Protección de los Derechos del Consumidor, the California Department of Real Estate, and the Better Business Bureau of Alaska, Oregon & Western Washington.

NOTE:  The Commission files a complaint when it has “reason to believe” that the law has been or is being violated and it appears to the Commission that a proceeding is in the public interest.  The cases will be decided by the court.

The Federal Trade Commission works for consumers to prevent fraudulent, deceptive, and unfair business practices and to provide information to help spot, stop, and avoid them.  To file a complaint in English or Spanish, visit the FTC’s online Complaint Assistant or call 1-877-FTC-HELP (1-877-382-4357). The FTC enters complaints into Consumer Sentinel, a secure, online database available to more than 2,000 civil and criminal law enforcement agencies in the U.S. and abroad. The FTC’s website provides free information on a variety of consumer topics. Like the FTC on Facebook, follow us on Twitter, and subscribe to press releases for the latest FTC news and resources.