Many people think scams mostly affect older adults. But reports to the FTC’s Consumer Sentinel tell a different story: anyone can be scammed. In fact, reports suggest that many scams are harming younger people more than older adults. While there’s more to the story, the broad theme is that scams affect every age group, but differently.

In 2021, Gen Xers, Millennials, and Gen Z young adults (ages 18-59) were 34% more likely than older adults (ages 60 and over) to report losing money to fraud,[1] and some types of fraud stood out. Younger adults reported losses to online shopping fraud – which often started with an ad on social media – far more often than any other fraud type, and most said they simply did not get the items they ordered.[2] Younger adults were over four times more likely than older adults to report a loss on an investment scam.[3] Most of these were bogus cryptocurrency investment opportunities.[4] And this age group reported losing money on job scams at more than five times the rate of older adults. Many college students reported that they were scammed after getting a message at their student email address about a so-called job opportunity.[5] The median individual reported fraud loss by people 18-59 was $500 in 2021. 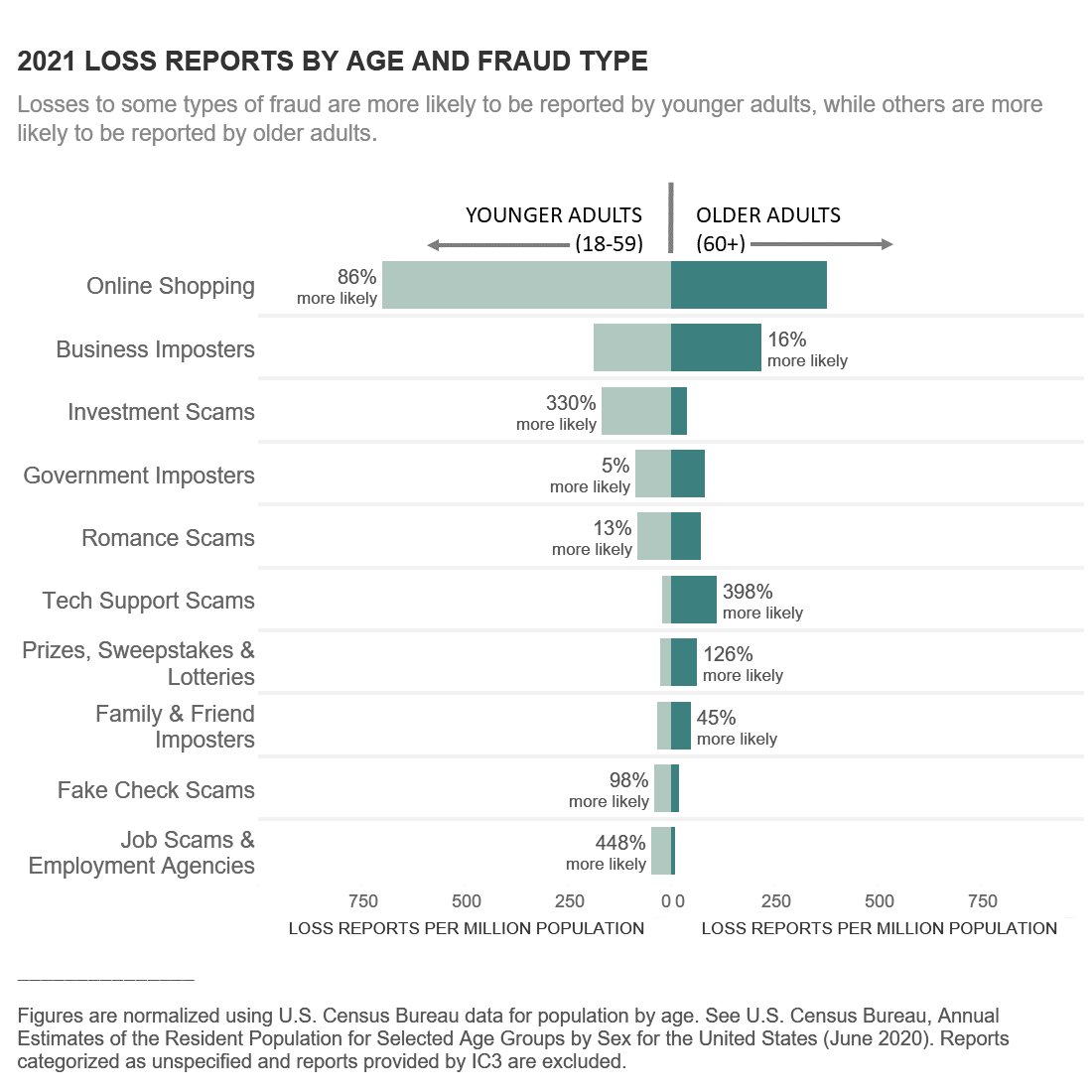 While older adults were less likely to report losing money to fraud, those 70 and over reported much higher median individual losses. The median reported loss was $800 for people 70-79, and a whopping $1,500 for those 80 and over.[6] But older adults were also much more likely to report fraud they had spotted or encountered – but avoided losing any money to – than people 18-59.[7] And for older adults, different types of scams stood out. In 2021, they were about five times more likely to report losing money on tech support scams than younger adults. Tech support scammers impersonate companies like Apple and Microsoft to trick you into sending money to fix an “urgent” security problem that doesn’t exist. Older adults were also more than twice as likely to report losing money on a prize, sweepstakes, or lottery scam. Prize, sweepstakes, and lottery scams often impersonate a well-known business to trick people into sending money to claim nonexistent winnings. Reports point to these scams as especially costly to people 80 and over – about one out of every three dollars reported lost to fraud by this age group in 2021 was lost to a prize, sweepstakes, and lottery scam.[8] 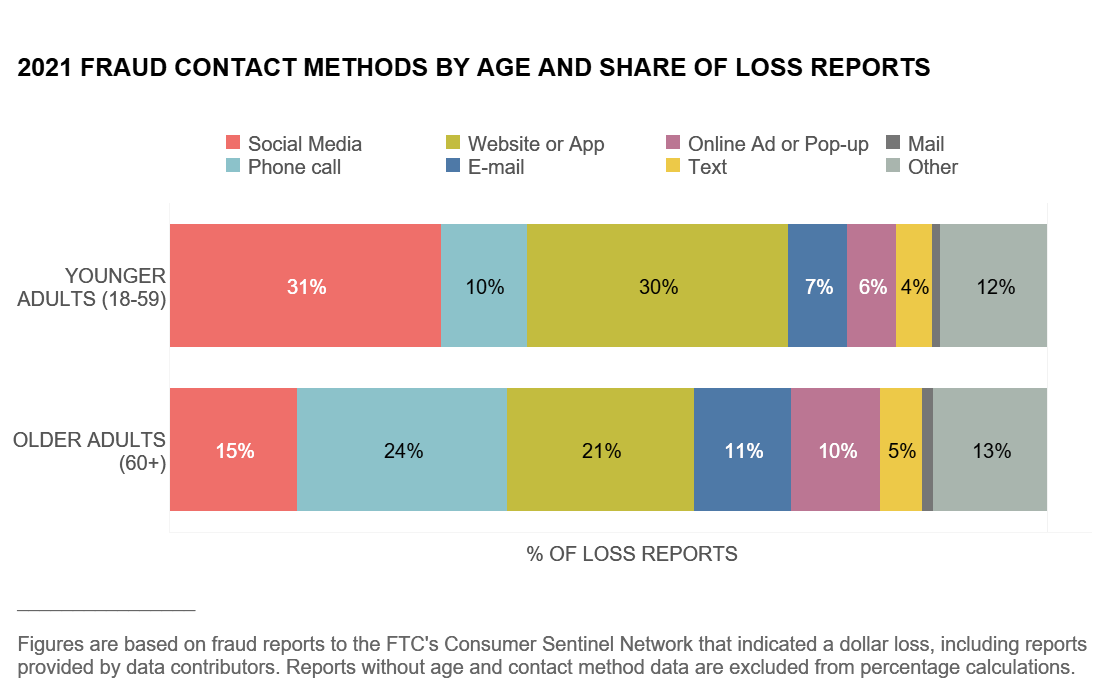 Reports also point to generational differences in how scammers reach people. On social media, the differences are striking: in 2021, 31% of people 18-59 who reported losing money on a scam said it started on a social media platform; compare that to 15% of people 60 and older. For Gen Z young adults and younger Millennials (ages 18-29), reports suggest social media plays an even larger role – nearly 40% of 2021 fraud loss reports by this age group were to frauds originating on social media. Scams that start with a phone call also show big age differences: in 2021, 24% of older adults who reported losing money to a scam said it started with a phone call, compared to just 10% of younger consumers. The numbers are higher still for people 80 and over – more than 40% of their 2021 loss reports identified a phone call as the contact method.[9]

The lesson is clear: no matter your age, learning about scams is important for everyone. By sharing what you know, you can help protect others in your community from scams. To learn more, visit ftc.gov/PassitOn. And for a deeper dive into the FTC’s data on scams and age, read the FTC’s Protecting Older Consumers Report.

[1] This comparison of older adults and younger adults is normalized against the population size of each age group. The analysis is based on U.S. Census Bureau data for population by age. See U.S. Census Bureau, Annual Estimates of the Resident Population for Selected Age Groups by Sex for the United States (June 2020), available at https://www.census.gov/data/tables/time-series/demo/popest/2010s-national-detail.html. Data provided by the Internet Crimes Complaint Center (IC3) are excluded here and throughout this Spotlight due to differences in the age ranges collected from consumers and differences in report categorization. About 46% of fraud reports filed in 2021 included consumer age information.

[2] In 2021, 59% of online shopping loss reports by people 18-59 indicated that the order was never received. Excluding reports that did not specify a contact method, 38% of these consumers indicated that the fraud started with an ad, a post, or a message on social media.

[5] Job scams often use fake checks to trick people into sending money. People 18-59 were nearly twice as likely as older adults to report a loss on a fake check scam in 2021, and many of these reports were also classified as job scams.

[7] In 2021, controlling for population size (see footnote 1), people 60 and older were 68% more likely than people 18-59 to file a fraud report indicating no money was lost. The largest share of 2021 no-loss reports by older adults were about phone scams, and these were most often calls from scammers impersonating businesses and government agencies.

File
Data Spotlight: Who experiences scams? A story for all ages (409.1 KB)