Online dating can be a great way to find lasting love – or even your next fling. But reports to the FTC suggest it also creates opportunities for scammers. In the past five years, people have reported losing a staggering $1.3 billion to romance scams,[1][2] more than any other FTC fraud category. The numbers have skyrocketed in recent years, and 2021 was no exception – reported losses hit a record $547 million for the year. That’s more than six times the reported losses in 2017 and a nearly 80% increase compared to 2020. The median individual reported loss in 2021 was $2,400.[3] 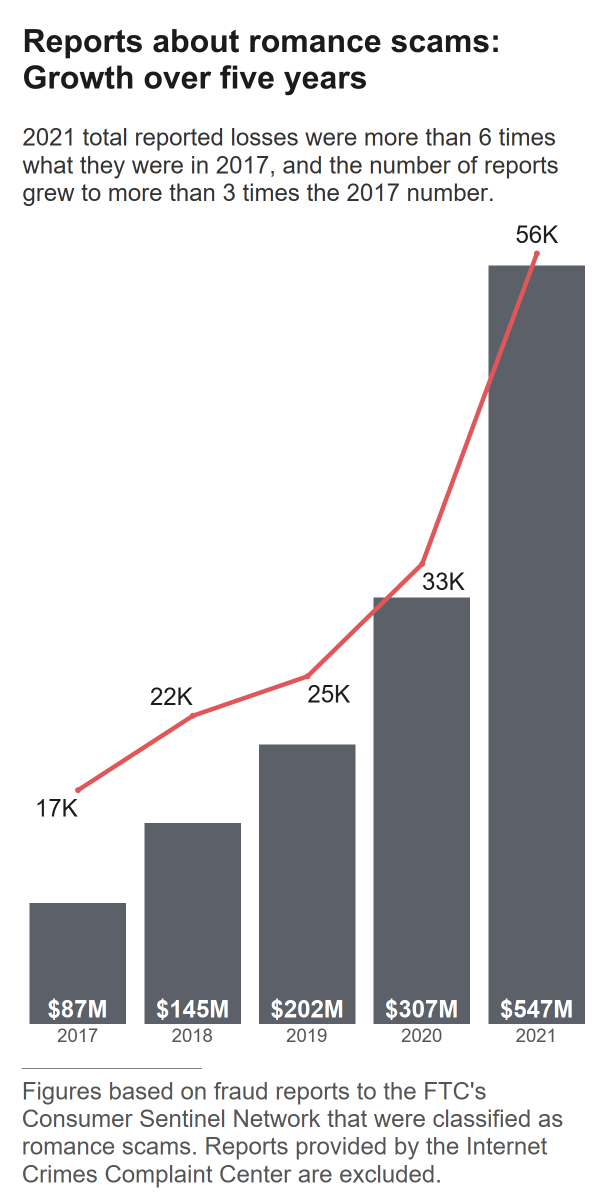 Reports show that romance scammers are masters of disguise. They create fake online profiles with attractive photos swiped from the web. Sometimes they even assume the identities of real people. They may study information people share online and then pretend to have common interests. And the details they share about themselves will always include built-in excuses for not meeting in person. For example, many reportedly claim to be serving overseas in the military or working on an offshore oil rig.

Many people who’ve experienced scams report being contacted on dating apps. But you don’t have to be looking for love to be courted by a romance scammer. Reports of unexpected private messages on social media platforms are common. More than a third of people who said they lost money to an online romance scam in 2021 said it began on Facebook or Instagram.[4]

Romance scammers weave all sorts of believable stories to con people, but their old standby involves pleas for help while claiming one financial or health crisis after another. The scammers’ stories might involve a sick child or a temporary inability to get to their money for a whole range of reasons. People who lost money to a romance scammer often report sending money repeatedly: they believe they’re helping someone they care about. But it’s all a lie.

In another common twist on the romance scam, people agree to help transfer money as a favor to their supposed sweetheart. The scammer often claims to need help getting their inheritance money or moving funds for an important business deal. Stories like this often set people up to become “money mules” – they may think they’re just helping, but they’re really laundering stolen funds. These stories are also used to trick people into sending their own money. People have reported paying all sorts of bogus fees to accept money that never turns up. Others say they deposited a check from their sweetie and sent some of the money as instructed, only to find out later that the check was fake – leaving them without the money they sent. Still others report sending money based on promises – later proven to be false – that they would be repaid.

A growing trend in 2021 was scammers using romance as a hook to lure people into bogus investments, especially cryptocurrency. People are led to believe their new online companion is a successful investor who, before long, casually offers investment advice. These so-called investment opportunities often involve foreign exchange (forex) trading or cryptocurrency. And when people follow this investment “advice,” they wind up losing all the money they “invest.”

Reports about romance scams increased for every age group in 2021. The increase was most striking for people ages 18 to 29. For this age group, the number of reports increased more than tenfold from 2017 to 2021. But the reported median loss increased with age: people 70 and older reported the highest individual median losses at $9,000, compared to $750 for the 18 to 29 age group.[7]

So how can you spot scammers if you’re looking for love online?

Help stop scammers by reporting suspicious profiles or messages to the dating app or social media platform. Then, tell the FTC at ReportFraud.ftc.gov. Learn more at ftc.gov/romancescams.

[1] This figure and figures throughout this Spotlight are based on reports to the FTC's Consumer Sentinel Network that were classified as romance scams, excluding reports provided by the Internet Crimes Complaint Center (IC3). IC3 reports submitted prior to 2019 are not included in Sentinel, so these reports were excluded to ensure greater consistency in reporting trends over time.

[2] Because the vast majority of frauds are not reported to the government, this figure reflects just a small fraction of the public harm caused by romance scams. See Anderson, K. B., To Whom Do Victims of Mass-Market Consumer Fraud Complain? at 1 (May 2021), available at https://papers.ssrn.com/sol3/papers.cfm?abstract_id=3852323 (study showed only 4.8% of people who experienced mass-market consumer fraud complained to a Better Business Bureau or a government entity).

[3] Reports provided by MoneyGram and Western Union are excluded for this calculation as these data contributors report each transaction separately, which typically affects calculation of an individual’s median loss.

[4] This figure is based on 2021 loss reports directly to the FTC categorized as romance scams and where the consumer identified an online platform. Of these, the top platforms identified as the starting point for the scam were Facebook (23%) and Instagram (13%).

[6] About 28% of people who reported losing money on a romance scam in 2021 said they paid with a gift card or reload card, followed by cryptocurrency (18%), payment app or service (14%), bank transfer or payment (13%), and wire transfer (12%). These figures exclude MoneyGram and Western Union as these data contributors report each transaction separately, which affects the number of reports.