Gift cards are an easy way to give. Reports to the FTC’s Consumer Sentinel show they’re also an easy way to take. About one in four people who report losing money to fraud say it happened when a scammer tricked them into giving the numbers on the back of a gift card.1 Gift cards are far more frequently reported than any other payment method for fraud,2 and the numbers have reached staggering new highs compared to past years.3 In the first nine months of 2021 alone, nearly 40,000 people reported $148 million stolen using gift cards. And because the vast majority of frauds are not reported to the government, this reflects only a fraction of the harm these scams cause.4 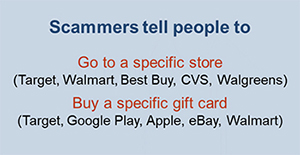 Scammers favor gift cards because they are easy for people to find and buy, and they have fewer protections for buyers compared to some other payment options. Scammers can get quick cash, the transaction is largely irreversible, and they can remain anonymous.

According to reports received by the FTC, scams demanding gift cards most often start with a phone call from someone impersonating a well-known business or government authority.5 Many people report that a scammer posing as Amazon or Apple told them to send pictures of the numbers on gift cards to fix a supposed security problem with their account. Sometimes they call those numbers “security codes.” But the only thing the numbers are good for is taking the money on the card. Other people report that a scammer claiming to be the Social Security Administration said their bank accounts would be frozen as part of an investigation. They’re told to buy gift cards to avoid arrest or to secure access to their money. Reports also show that scammers asking for gift cards pretend to be a love interest, employer, sweepstakes or lottery company, or family member in trouble. 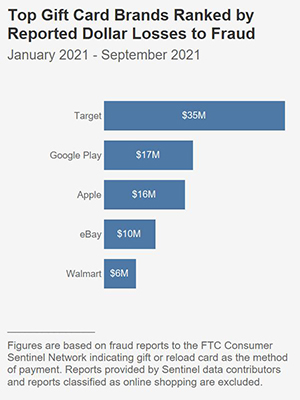 Whatever the story, reports show that scammers don’t settle for just any card – they tell people the specific gift card brands to buy. In the first nine months of 2021, over twice as much money was reported lost on Target gift cards than any other brand. Google Play gift cards were next, followed by Apple, eBay, and Walmart cards.

Scammers use lots of tricks to avoid detection. People often say the scammer sent them to several store locations to make multiple purchases. Scammers tell people to stay on the phone with the scammer the entire time – a trick to make sure they don’t call anyone who might help. Scammers even coach people on what to say if a cashier asks questions; they don’t want anyone to stop the scam, and they know store employees are often the only people who can help.

Both the number of reported gift card scams and total losses have increased every year since 2018.6 Losses are certainly up due to the higher number of reports, but individuals also report that they’re losing a lot more money. In fact, losses of $5,000 or more have increased from about 8% of reports in 2018 to about 14% in the first nine months of 2021. Over the same period, median reported losses increased from $700 to $1,000. 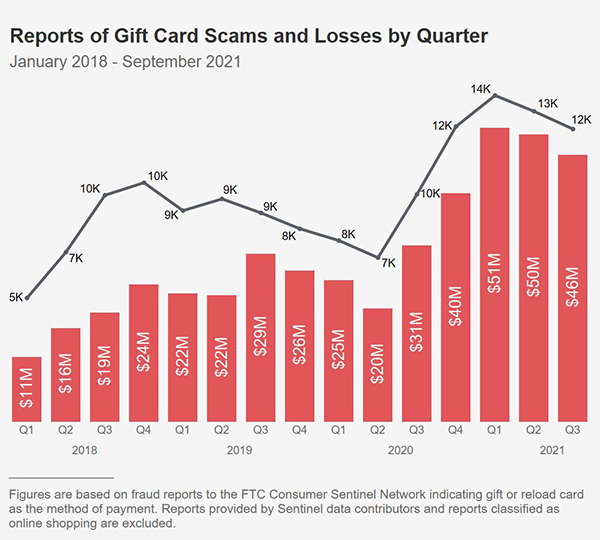 Losses also vary by card brand. Target cards, for example, saw a median reported loss of $2,500 in the first nine months of the year, far higher than other frequently reported cards.7 In addition, 30% of people who paid with a Target card said they lost $5,000 or more.8

Whenever someone demands to be paid with a gift card, that’s a scam. It’s just that simple. Gift cards are for gifts, not for payments. If someone convinced you to give them the numbers on a gift card or send them a photo, hang onto the card and your receipt, and report it to the card issuer right away. You’ll find contact information for some major gift cards at ftc.gov/giftcards. Then report your experience to the FTC at ReportFraud.ftc.gov.

If you’re a retailer, or state or local law enforcement, and you’re interested in helping your customers and neighbors avoid gift card scams, visit ftc.gov/StopGiftCardScams to download, print, and share materials in your store and community.

1 From January 2018 through September 2021, 26.6% of consumers who reported losing money to fraud indicated the money was taken using gift cards or reload cards. From January 2021 through September 2021, this figure was 26.1%. Reports that do not indicate a method of payment are excluded. These figures and figures throughout this Spotlight are based on fraud reports directly to the FTC indicating gift card or reload card as the method of payment. Fraud reports classified as “online shopping” are excluded here and throughout this Spotlight because of the legitimate use of gift cards among large retailers.

4 See Anderson, K. B., To Whom Do Victims of Mass-Market Consumer Fraud Complain? at 1 (May 2021), available at https://papers.ssrn.com/sol3/papers.cfm?abstract_id=3852323 (study showed only 4.8% of people who experienced mass-market consumer fraud complained to a Better Business Bureau (“BBB”) or a government entity).