These impersonators get your attention with messages to call about suspicious activity or unauthorized purchases on your Amazon account. When you call the number, a phony Amazon representative tricks you into giving them remote access to your computer or phone to supposedly fix the problem and give you a refund. But then—whoops—a couple of extra zeros are keyed in and too much money is (supposedly) refunded. They tell you to return the difference. In fact, some people have reported that the “representative” even begged for help, saying Amazon would fire them if the money wasn’t returned. 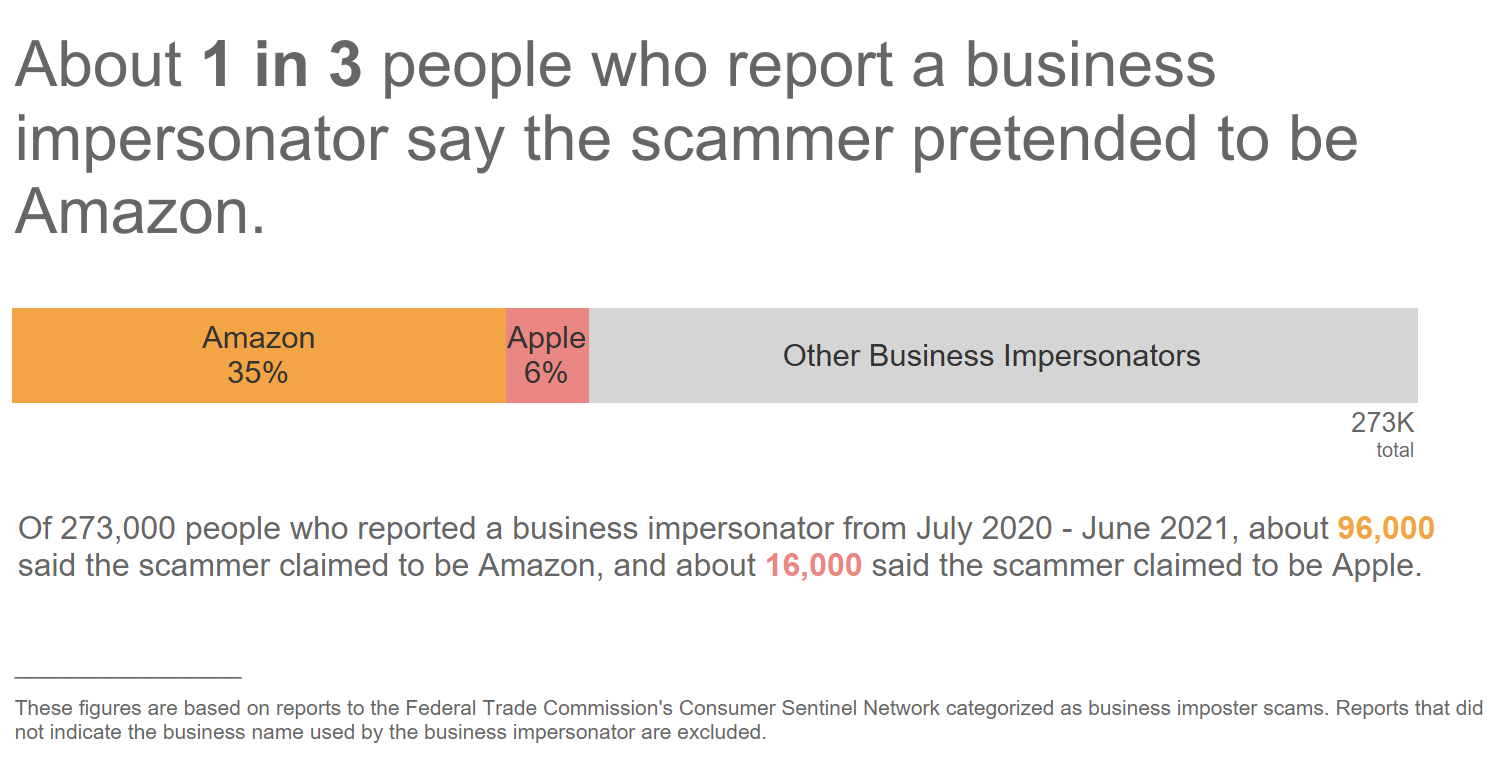 To make their lies about refunding that so-called overpayment more believable, scammers have reportedly accessed people’s online banking. They move money from one account to another—say, from savings to checking. Then, when people see a large deposit in their checking account, they think it’s the refund, but it’s all fake. If they send money, as requested, they end up sending their own (very real) money.

In another twist, scammers tell people to buy gift cards and send pictures of the numbers on the back. The scammers may call these numbers “blocking codes” or “security codes,” and explain that sharing them can block the hackers who—supposedly—took over the Amazon account in question. But the only thing those numbers are good for is getting (or stealing) the money on the card. After people send pictures of the gift cards, they often report getting texts confirming a supposed account credit in the amount of each gift card purchase. That’s just another trick scammers use to get their targets to buy more cards.

Another common hook are text messages that say you’ve won a raffle for a free product from Amazon. People who click the link to claim their free prize then have to enter credit card information to pay for “shipping.” Before long, they see charges they never agreed to.

Most people who report these scams say the scammer contacted them.2 But some people have reported finding bogus phone numbers when searching online for the number to call Amazon about a real issue. Of course, the scammers who answer calls to those phone numbers are happy to “help.”

The data suggest that Amazon impersonation scams may be disproportionately harming older adults. Over the past year, people ages 60 and up were over four times more likely than younger people to report losing money to an Amazon impersonator.3 Older adults also reported losing more money—their median reported loss was $1,500, compared to $814 for people under age 60.

After Amazon, Apple is the second most frequently reported company, but it’s a distant second. Apple impersonators reportedly tell people their iCloud account has been compromised or that they’ve been chosen to get a free iPad. Sound familiar? Scammers change names but often use the same lies again and again.4

Here are ways to avoid some common tricks business impersonators use:

To learn more about how to spot, avoid, and report scams—and how to recover money if you’ve paid a scammer—visit ftc.gov/scams. If you spot a scam, report it to the FTC at ReportFraud.ftc.gov.

2 About 70% of Amazon impersonator scams reported from July 2020 through June 2021 identified a phone call as the method of contact, followed by text (15%), and email (8%). These percentages exclude reports that did not specify a method of contact.

3 This age comparison is normalized based on the number of loss reports per million population by age during this period. Reports from consumers under age 18 are excluded. Population numbers were obtained from the U.S. Census Bureau Annual Estimates of the Resident Population for Selected Age Groups by Sex for the United States (June 2020).