Gift cards make great holiday gifts. But reports to FTC show that scammers like getting them, too. Scammers don’t ask nicely, though. They use trickery to insist on gift cards, and they ask for specific brands. Scammers prefer gift cards because they can get quick cash while staying anonymous. In fact, giving a scammer the PIN numbers off the back of a gift card is the number one way people report losing money on many of the top frauds reported to the FTC.

About one in four people who tell the FTC they lost money to fraud say they paid with a gift card.1 In fact, gift cards have topped the list of reported fraud payment methods every year since 2018. During that time, people reported losing a total of nearly $245 million, with a median individual loss of $840.2 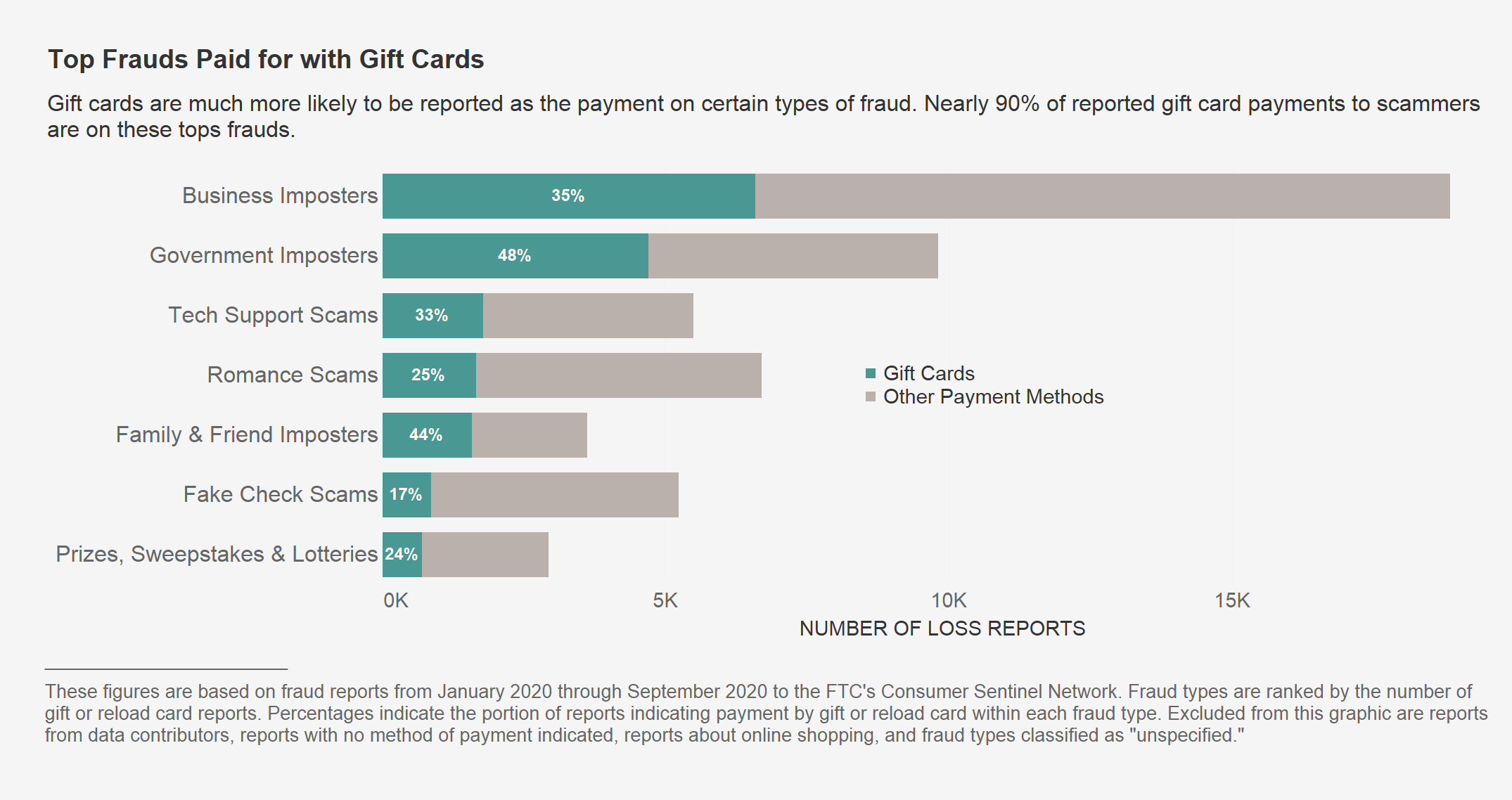 Based on reports, certain types of scams seem to favor gift cards as a form of payment. Nearly half of people who reported paying someone posing as a government authority said they paid with a gift card. Nearly 45% of those who reported losing money to someone pretending to be a friend or a family member paid with gift cards. And gift cards were the reported payment method in about a third of tech support and other business impersonation scams.3

Scammers always have some reason why you need to buy gift cards. They might say you’re in serious trouble with the government and must buy “electronic vouchers” to avoid arrest. Some people say scammers posing as businesses promised special promotional pricing for phone or TV service if they paid for the first three months with a gift card. Others thought they were buying gift cards to evaluate a retailer as a “secret shopper.”

Scammers tell people to go to specific stores like Walmart, Target, CVS, and Walgreens to buy the cards. Some people have reported that alert store employees have intervened, but scammers work hard to stop that from happening. They keep people on the phone and tell them not to talk to anyone about why they’re buying the cards. They even tell people what to say if anyone asks questions. 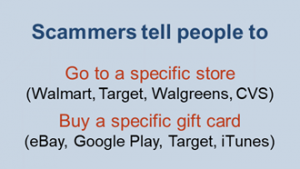 The top gift card brands that scammers demand change over time. Reports to the FTC suggest that eBay is now the gift card of choice for scammers. It replaces Google Play in the decidedly un-coveted top spot, which earlier replaced iTunes as the top card brand people reported.4 But reports of fraud payments with both these brands declined significantly in 2019, and the brand reported most often in 2020 is eBay. Notably, reports suggest scammers have diversified, and now frequently request a variety of other gift cards in addition to these top brands.5

Whenever someone demands to be paid with a gift card, that’s a scam. Gift cards are for gifts, not for payment. If you paid someone with a gift card by giving them the numbers on the card, keep the card and your receipt, and report it to the card issuer immediately. You’ll find contact information for some major gift cards at ftc.gov/giftcards. Then report your experience to the FTC at ReportFraud.ftc.gov. To learn more about spotting and avoiding gift card scams, visit ftc.gov/giftcards.

If you’re a retailer, or state or local law enforcement, and you’re interested in helping people avoid gift card scams, visit ftc.gov/StopGiftCardScams to download, print, and share materials in your store and community.

1 This figure is based on reports from January 2018 through September 2020, exluding reports that do not specify a payment method. Figures pertaining to gift card reports throughout this Spotlight are based on the total number of fraud reports that identify a gift or reload card (e.g., MoneyPak) as a method of payment. This analysis excludes fraud reports classified as “online shopping” because of the legitimate use of gift cards among large retailers. To eliminate inconsistencies between data sources, reports provided by Sentinel data contributors and reports that do not specify a method of payment are also excluded from this analysis.

3 Tech support scams typically involve the impersonation of computer companies like Microsoft, and start with a call or popup warning about a computer virus or other technical issue. Consumers affected by tech support scams pay for “repair” of a nonexistent problem.

4 Card brands are identified through keyword analysis of the narratives provided in gift card reports.

5 In 2020 through Q3, the most reported gift and reload card brands mentioned in fraud reports are eBay, Google Play, Target, iTunes, and Amazon. Together, these five brands make up approximately 39% of the reports where people indicated they paid a scammer with a gift or reload card. Reports provided by data contributors or that are classified as “online shopping” are excluded. Card brands are identified through keyword analysis of the narratives provided in this subset of reports.