Social media can be a great way to connect with friends while the pandemic has you keeping your distance. But reports to FTC’s Consumer Sentinel Network suggest that that social media websites and apps have become popular hangouts for scammers, too. Reports that people lost money to scams that started on social media1 more than tripled in the past year, with a sharp increase in the second quarter of 2020.

Reports about scams that started on social media have been increasing for years. In 2019, total reported losses to these frauds reached $134 million. But reported losses reached record highs, climbing to nearly $117 million in just the first six months of 2020. In that time, the reported scams that started on social media often related to online shopping, romance scams, and supposed economic relief or income opportunities.

Reports about ecommerce sites that don’t deliver the goods top the FTC’s list.2 These reports skyrocketed with the pandemic, and nearly one in four reports to the FTC mentioned a social media hook.3 People mentioned Facebook or Instagram in 94% of reports that identified a specific platform,4 many saying they ordered after seeing an ad. These scam ads look real and can be carefully targeted to reach a particular audience. The scammers can delete comments on their ads or posts, so that negative responses don’t show up and alert people to the con.

About half of all romance scam reports to the FTC since 2019 involve social media, usually Facebook or Instagram.5 However, since the pandemic began, more people than ever have reported losing money to romance scams. That includes the scams that start with a social media message or friend request.6 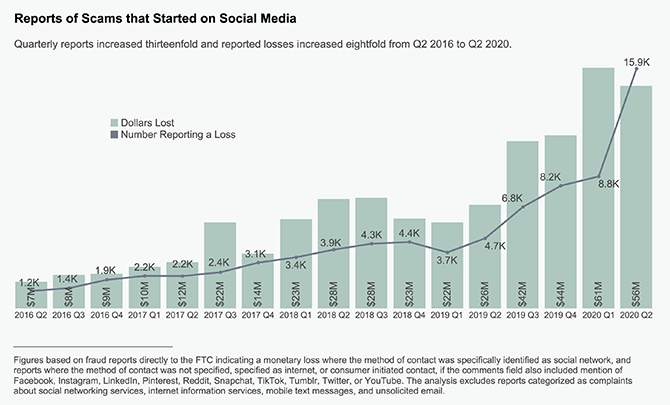 People are increasingly reporting social media messages that offer grant money and other giveaways, supposedly to help people during the pandemic. These scams offer so-called relief to people in need of cash, but scammers are really after your money, your information, or both. These messages can even come from friends who may have been hacked, or who don’t know the offer is a scam, since scammers often tell people to send their message on to others.

As people seek more ways to earn money, reports about multi-level marketing (MLM) companies and pyramid schemes – including blessing circles and other gifting schemes – on social media have increased. The numbers were up a staggering fivefold in the second quarter of 2020.7 Many of these recruitment offers reportedly came with extravagant claims about likely earnings, which is always a red flag. Some MLM companies are illegal pyramid schemes: they survive on recruiting new participants rather than selling products. Most people who join an MLM make little or no money with it, while people who become involved with a pyramid scheme typically lose everything they invest.

The many scams that show up on social media may benefit from scammers’ low-cost access to entire networks of people. The scammer can hide behind a phony profile, pretend to be someone you know, or even take over a real account. By hiding who they are, they can get into a virtual community you trust, leading you to be more likely to trust them.

Here are some tips to help you steer clear of scammers on social media:

If you spot a scam, report it to the social media site and the FTC at ftc.gov/complaint.

1 This analysis includes fraud reports directly to the FTC where the method of contact was specifically identified as social network, and reports where the method of contact was not specified, specified as internet, or consumer initiated contact, if the comments field also included mention of Facebook, Instagram, LinkedIn, Pinterest, Reddit, Snapchat, TikTok, Tumblr, Twitter, or YouTube. The analysis excludes reports categorized as complaints about social networking services, internet information services, mobile text messages, and unsolicited email.

2 In Q1 2020 and Q2 2020, 28% of reports of frauds that started on social media were categorized as online shopping fraud where the goods were ordered but not received, followed by romance scams (13%), business imposter scams (6%), family and friend imposters (6%), and government imposter scams (4%).

4 Of the 9,832 reports (in Endnote 3) about online shopping orders that never arrived, 7,974 reports identified one or more of the social media platforms listed in Endnote 1, including 7,502 that identified Facebook or Instagram.

7 These figures are based on reports directly to the FTC categorized as multi-level marketing\pyramids\chain letters. In 2020, reports in this category increased from 387 total reports in the first quarter to 824 total reports in the second quarter. Of those that started on social media, the increase was 94 in Q1, compared to 491 in Q2.