Our men and women in uniform take on unique hardships when they choose to serve. Identity theft shouldn’t be one of them. But the FTC’s Consumer Sentinel Network database shows that active duty servicemembers file reports about many forms of identity theft – and related problems with debt collection and credit reporting – at much higher rates than non-military consumers.

Five years of identity theft data reported to the FTC on IdentityTheft.gov show that active duty servicemembers are 76% more likely than other adults to report that an identity thief misused an existing account, such as a bank account or credit card.1 Most notably, they are nearly three times as likely to report that someone used a debit card or some other electronic means to take money directly from their bank account.2 This finding suggests that servicemembers are experiencing highly disproportionate instances of theft from their financial accounts compared to the general population. That’s not all. They also are 22% more likely to report that their stolen information was misused to open a new account,3 especially new credit card accounts. 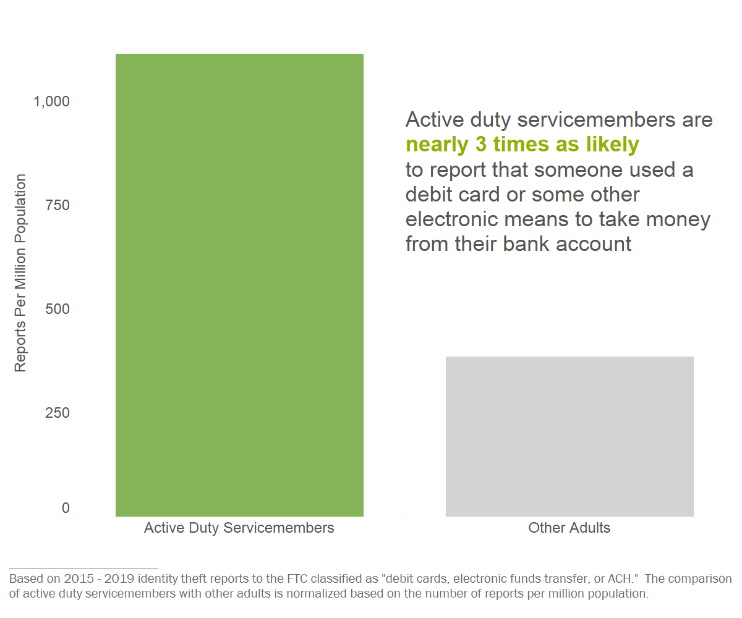 Recovering from identity theft can be a challenge in the best of circumstances, and it can take months or even years to untangle the mess when not caught quickly. But keeping a close eye on credit reports, which can help someone spot early warning signs, can be difficult for active duty troops. They report that creditors often send notices to old addresses, which may delay their ability to act on warning signs, such as bills from unknown creditors or unexpected credit card charges.4 In fact, one-fifth of active duty servicemember reports indicate that they have already experienced two or more types of identity theft.

However, many active duty servicemembers report that they have taken protective steps. Nearly half tell us they have reviewed their credit reports and 40% say they have a fraud alert in place when they report identity theft. What the data doesn’t tell us is how many took these steps before learning of a problem.

Securing personal information may also present special challenges for active duty troops. Nearly 14% of their reports indicate that a family member or someone they know stole their identity, compared to just 7% of other adults who report. Reports suggest that this often happens when people have access to important documents or financial records left behind during military assignments.

When identity theft happens, credit problems and collection calls often follow. Based on data provided by the Consumer Financial Protection Bureau, active duty servicemembers report problems with debt collectors and credit bureaus at more than twice the rate of other adults.5 More than 40% of the debt collection reports indicate that the debt was caused by identity theft, and more than 40% of the reports about credit bureaus indicate that information on a credit report belongs to someone else.6 And many say they worry that these problems could put their security clearances and their military careers at risk.

Frequent moves and overseas service are also associated with other kinds of credit reporting complaints. Military personnel have protections that can allow them to cancel housing contracts, vehicle leases, and some other accounts before they ship out, but reports show this doesn’t always go smoothly. Often, people learn of a problem only when they spot a ding (or worse) on their credit reports.

MilitaryConsumer.gov is a resource for servicemembers, veterans, and their families to avoid scams and manage money. Here are a few things you can do now to protect yourself:

Go to IdentityTheft.gov to report and get a plan to recover from identity theft.

1 This and other identity theft figures are based on 2015-2019 identity theft reports to the FTC classified as the following theft subtypes: checking\savings account – existing, credit card – existing, debit cards, electronic funds transfer, or ACH, ITAC - account takeover, landline telephone – existing accounts, mobile telephone – existing accounts, utilities – existing accounts. The comparison of active duty servicemembers with other adults is normalized based on the number of reports per million population. The population figure for other adults was obtained from the U.S. Census Bureau 2018 American Community Survey 1-year demographic and housing estimates. The population figure for active duty servicemembers was obtained from the Defense Manpower Data Center December 31, 2019 file titled Number of Military and DoD Appropriated Fund (APF) Civilian Personnel Permanently Assigned. The FTC received 13,467 identity theft reports from 2015 through 2019 that indicated the consumer was an active duty servicemember.

2 This figure is based on 2015-2019 identity theft reports to the FTC classified as debit cards, electronic funds transfer, or ACH. The comparison of active duty servicemembers to other adults is normalized based on the number of reports per million population as described in endnote 1.

4 About 12% of the 1,842 2018 and 2019 debt collection complaints from active duty servicemembers in Sentinel that were contributed by the Consumer Financial Protection Bureau (CFPB) cited problems receiving proper written notification of a debt, often due to relocation.

5 This figure is based on 2018 and 2019 reports in Sentinel contributed by the CFPB and classified as credit bureaus, creditor debt collection, and third party debt collection. The comparison of active duty servicemembers to other adults is normalized based on the number of reports per million population as described in endnote 1.