Today’s children see more promotional ads for other programming, but fewer paid ads and fewer minutes of advertising on television, according to a report released today by the staff of the Federal Trade Commission. The research looks at television ad exposure for children in the year 2004 and compares it to similar research from 1977. The report also finds that children are not exposed to more food ads on television than they were in the past, although their ad exposure is more concentrated on children’s programming. The report's 2004 findings are based on a staff analysis of copyrighted Nielsen Media Research/Nielsen Monitor-Plus data.

According to the report, promotions for television programming account for 28 percent of all TV ads viewed, while food ads account for 22 percent. Other top categories included screen and audio entertainment and games, toys and hobbies. Children get approximately half of their food advertising and about one-third of their total television advertising exposure from programs in which children are at least 50 percent of the audience. 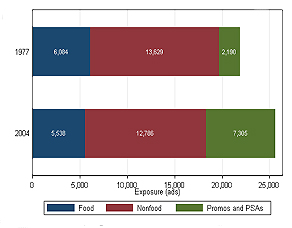 The FTC also is currently conducting a separate study on all methods of marketing foods and beverages to children and adolescents.

This study will include information on the types of food marketed; the types of marketing techniques used; the amount spent on marketing; the nature of marketing activities; and any marketing policies, initiatives, or research in effect or undertaken by food and beverage companies. Specifically, the study will explore not only traditional media, including television, radio, and print, but will also include data on movie theater/video/video game advertising; company-sponsored Internet sites; other Internet advertising; other digital advertising; in-store advertising and promotions; specialty item or premium distributions; public entertainment events; product placements; character licensing and cross-promotions; sponsorships of sports teams or individual athletes; packaging and labeling; word-of-mouth marketing; viral marketing; celebrity endorsements; in-school marketing; advertising in conjunction with philanthropic endeavors; and other marketing expenditures.

Today’s report by the FTC’s Bureau of Economics formally issues research first presented at the FTC’s joint workshop with the Department of Health and Human Services on marketing, self-regulation, and childhood obesity in July 2005. The research tallies not just the number of ads aired during the time period studied in 2004, but also takes into account the size of the audience viewing the ads. The report notes that this research provides a baseline for studying future changes in children’s exposure to television advertising.

The FTC and HHS are hosting a Forum on Marketplace Responses to Childhood Obesity as a follow-up to the 2005 workshop. The forum, scheduled for July 18, 2007, will review industry-wide initiatives and specific product, packaging, and marketing innovations implemented by individual companies. In addition, the findings of the Bureau of Economics’ report on children’s exposure to television advertising and other research will be presented.

Copies of the report are available from the FTC’s Web site at http://www.ftc.gov and also from the FTC’s Consumer Response Center, Room 130, 600 Pennsylvania Avenue, N.W., Washington, D.C. 20580. The FTC works for the consumer to prevent fraudulent, deceptive, and unfair business practices in the marketplace and to provide information to help consumers spot, stop, and avoid them. To file a complaint in English or Spanish or to get free information on any of 150 consumer topics, call toll-free, 1-877-FTC-HELP (1-877-382-4357), or use the complaint form at http://www.ftc.gov/ftc/complaint.shtm. The FTC enters Internet, telemarketing, identity theft, and other fraud-related complaints into Consumer Sentinel, a secure, online database available to more than 1,600 civil and criminal law enforcement agencies in the U.S. and abroad.

Children's Exposure to Television Advertising in 1977 and 2004: Information for the Obesity Debate: A Bureau of Economics Staff Report

Food Marketing to Children and Adolescents