Today the FTC and DOJ released the 38th Annual Hart-Scott-Rodino Report, which details the agencies’ merger review and enforcement program for Fiscal Year 2015 (October 1, 2014 through September 30, 2015). This report, like the 37 previous versions, is a snapshot of one year’s worth of HSR filings, Second Requests and merger enforcement actions, including HSR compliance and merger cases filed by the agencies in federal court. But viewed together, the HSR annual reports tell the story of how the world’s first premerger notification program was conceived and how it has evolved over the years to provide for effective and efficient review to prevent mergers that may substantially lessen competition in violation of U.S. law before they occur.

As the chart below shows, when the number of merger filings go up, so does the number of mergers investigated and the number of mergers challenged—and the dynamic happens in reverse when merger activity declines, as it did in FY 2009. Of course, for any given merger, there is some lag time between the HSR filing, the issuance of a Second Request and any potential enforcement action, and all three may not occur in the same fiscal year. As a result, studying the numbers only for a given year does not tell the whole picture.

This chart shows the number of HSR filings and the number of Second Requests from Appendix A, plus the number of merger enforcement actions over the past ten years, as reported in each year’s annual HSR Report: 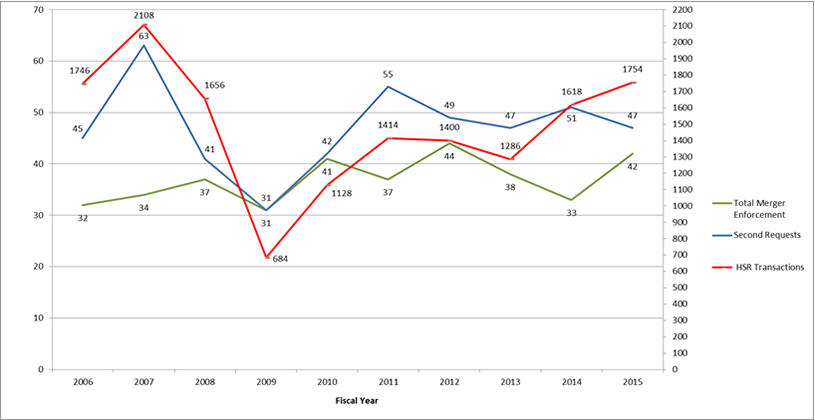 Homing in on this year’s report, here are a couple of observations about U.S. merger review for FY2015.

Merger filings are up again this year.

The number of transactions reported under the HSR Act increased again this year, up 8.3% over FY2014.  That’s on top of a 25.4% year-over-year increase in reported transactions for FY 2014.

Merger litigation was in the news.

In a typical year, the agencies bring one or two merger enforcement actions in federal court, cases in which the agency and the parties did not agree on a potential settlement that would resolve the competitive concerns created by the merger. But during FY2015, the FTC and DOJ filed a total of four preliminary injunction actions in federal court to prevent problematic mergers, and prepared to file papers in an additional nine before the parties abandoned their plans. On the FTC side, the Commission filed an administrative complaint and authorized staff to seek a preliminary injunction in two matters, Sysco/US Foods and Steris/Synergy. In a third case, Verisk/EagleView, the Commission filed an administrative complaint challenging the merger, but the parties abandoned their plans before the PI papers were filed. DOJ filed two merger cases in federal court (GE/Electrolux and Nat’l Cinemedia/Screenvision), both of which were abandoned post-complaint. Among the transactions that were abandoned pre-complaint were Applied Materials/Tokyo Electron and Comcast/Time Warner Cable. All-in-all, a busy year for merger litigation.

To minimize the risk that different enforcers impose conflicting remedies on the same proposed merger, the U.S. antitrust agencies cooperate with their foreign counterparts, both informally and formally with the granting of international waivers of confidentiality. When it comes to mergers, international cooperation helps avoid conflicting results, increases the predictability of outcomes, and facilitates more efficient use of limited agency resources.

FY 2015 saw several cross-border mergers in which international cooperation was key to reaching compatible outcomes in multiple jurisdictions. For example, FTC staff cooperated with the Mexican competition authority (COFECE), the Canadian Competition Bureau, and the European Union’s Directorate General for Competition while reviewing ZF Fredrichshafen AG’s proposed acquisition of TRW Automotive Holdings. To resolve competitive concerns raised by the FTC and by the EU, ZF committed to sell TRW’s entire suspension business in North America and Europe, a single divestiture that satisfied concerns raised in both regions. Similarly, in the Holcim/Lafarge merger where there were significant cross-border sales of cement, the FTC remedy required the divestiture of a set of assets located in both the US and Canada that was a subset of the broader asset package required to be divested by Canada. The DOJ reports that it cooperated closely with international counterparts to resolve competitive concerns in the GE/Alstom and Continental/Veyance mergers.

I think that rite aid should be allowed to be bought by walgreens I have checked the areas where all rite aid stores are and there is so much competition from pharmacies is unbelievable that there is a issue. I don't know why this has taken so long to look at, but freds has agreed to buy 1/5 of the stores, so there must be something other than competition that is the cause of the delay of the merger, like for instance politics favorable to cvs pharma.