You know those friendly calls from people contacting you on behalf of charities whose missions are close to your heart? According to the FTC and 46 agencies from 38 states and the District of Columbia, many of the 1.3 billion calls that telemarketer Associated Community Services (ACS) and related defendants placed to 67 million different phone numbers weren’t so friendly, weren’t from live operators, and didn’t result in consumers’ contributions going to support sick kids, breast cancer patients, services for veterans, and other worthy causes as claimed. The just-announced settlement with ACS and 12 affiliated companies and individuals signals a continuing crackdown on illegal practices by robocalling telefunders.

According to the complaint, the defendants conducted an invasive robocall onslaught and kept the lion’s share of the more than $110 million of consumers’ contributions – as much as 90 cents of every donated dollar. And what about those purported “charities” with whom ACS worked? They used names like Women’s Cancer Fund, Autistic Children of America, and Foundation for American Veterans and ACS told consumers that donations would benefit people in need “nationwide” or in consumers’ “local area.” But the FTC says ACS knew that of the already drop-in-the-bucket percentage of donation ACS passed on to them, the groups often spent just pennies on the dollar (if that much) for charitable purposes.

One interesting angle: This is the FTC’s first case specifically challenging defendants’ use of soundboard technology to further their scheme. For more than a decade, with a few narrow exceptions, the Telemarketing Sales Rule has banned robocalls. But telemarketers can disguise their use of robocalls through soundboard technology – a system where the conversational-sounding “caller” is really a recording run by an operator who plays prerecorded spiels for multiple consumers at the same time. They even can queue an assortment of prerecorded snippets designed to answer consumers’ anticipated questions. Consumers are often left with the misimpression they’re speaking with an affable caller helping a charity, rather than a for-profit telemarketer pressing buttons and juggling multiple calls behind the scenes to extract the maximum amount of cash.

Starting its business with live telemarketing calls, ACS introduced soundboard technology to its operations in 2011. By 2017, the company had transitioned to an “all soundboard, all the time” business model for its charitable solicitation calls. But as the complaint alleges, the defendants’ use of soundboard technology for first-time donors violated the TSR’s prohibition on “initiating any outbound telephone call that delivers a prerecorded message.” In addition, the complaint charges the defendants with violating the TSR provision that prohibits the delivery of prerecorded messages to prior donors unless the call promptly provides the consumer with a means to opt out of future messages.

The complaint also alleges the defendants violated the TSR by subjecting consumers to a relentless barrage of abusive calls. For example, ACS called over 2.29 million individual telephone numbers three or more times in a single day. A group of 1.3 million phone numbers got at least 10 calls in a single week. And pity the people who received three or more calls in just an hour.

According to the complaint, the defendants also used deceptive direct mail to tug at potential donors’ heart strings – and purse strings. Here’s one example from a pledge mailer for American Children’s Cancer Fund:

If it’s at all possible, I’m asking you to fulfill your pledge quickly. No, today please because a family is going to have their lights turned off if we don’t intervene, a family has until the end of the week to catch up on the rent or they’ll be evicted, a little girl with cancer needs new shoes, socks, T-shirts and pajamas because what she’s wearing now is old, worn and makes her feel terrible. You know, John, it would be troubling enough to think you may be without heat, lights or even a roof over your head. But going through such trouble while caring for a son or daughter with cancer, well, that would almost be unbearable, wouldn’t it? 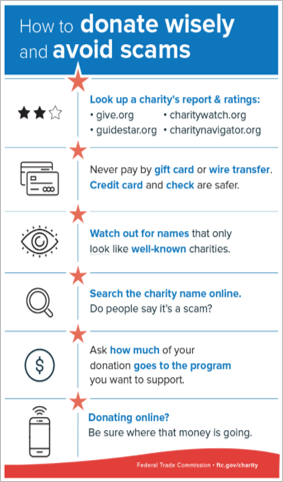 You’ll want to read the proposed settlement for the specifics, but some of the defendants are banned for life from conducting or consulting on any fundraising activities and from conducting telemarketing of any kind to sell goods or services. In addition, they can’t use existing donor lists and are prohibited from making any other misrepresentations about products or services. Other parties are banned from using robocalls and from any fundraising work or consulting on behalf of any charitable group or nonprofit that claims to work for causes similar to those outlined in the complaint. Two corporate defendants – Directele and The Dale Corporation – must cease operations and dissolve.

Based on their financial condition, the total judgment of $110,063,843 will be partially suspended after certain defendants turn over cash and valuables. The money will go into an escrow fund held by the State of Florida. With the Court’s approval, the proceeds will go to legitimate charities that support causes similar to those for which the defendants solicited.

Business executives often play leadership roles in the nonprofit sector in their community. Before you hire professional fundraisers, vet them carefully to ensure their commitment to scrupulous legal compliance. In addition, the FTC has advice for businesses and consumers – including a video – on how to evaluate charitable solicitations, spot potential scams, and direct your donations where they can do the most good.