Many consumers experience sticker shock when they total up what they pay each month for television, add-on channels, satellite programming, streaming services, and the vast array of other content they buy. So it’s no surprise that people thinking about cutting the cord were drawn to claims by New York-based Wellco, Inc., and CEO George Moscone that the company’s TV antennas would let users cancel their cable service and still get all of their favorite channels for free. But according to the FTC, Wellco’s products didn’t perform as promised. The settlement also addresses allegedly misleading marketing methods the defendants used to gain consumers’ trust. 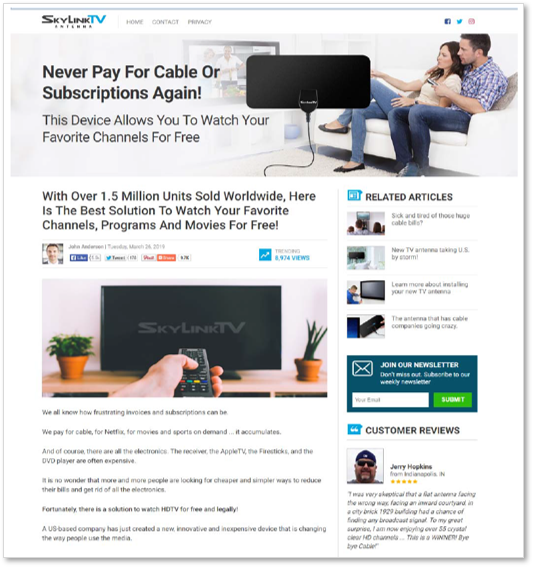 TV antennas? Consumers of a certain age will recall those clothesline-looking contraptions on the roof or rabbit ears that had to be configured just so to tune in to a favorite program. But antennas aren’t as retro as they sound. Televisions manufactured in the past 15 years have digital tuners that let people watch certain over-the-air channels for free if they get an indoor antenna. But let’s be clear. That includes just local broadcast channels – not “premium” channels available only from cable, satellite, or online services. According to the FTC, that critical distinction is one way that the defendants misled consumers who bought their products.

Using the brand names TV Scout, SkyWire, SkyLink, and Tilt TV, Wellco described its products as “a new antenna capable of receiving up to 100 channels or more completely free and legally.” According to its websites, “Never Pay For Cable Or Subscriptions Again? This Device Allows You To Watch Your Favorite Channels For Free.” The company also claimed users could “WATCH FREE CABLE TV!” and “Watch Your Favorite Channels, Programs And Movies For Free!” One upsell page even included TV screens with scenes from cable channel HBO’s Game of Thrones and Westworld and AMC’s Walking Dead.

According to the complaint, there’s a simple reason why people who installed the antennas would “Never Pay For Cable Or Subscriptions Again!” That’s because despite the defendants’ representations, consumers would never get content from cable or subscription services. The FTC alleges the defendants also deceptively claimed – among other things – that a substantial number of users would get 100+ premium channels; that they would get a minimum of ten channels, regardless of whether they lived in remote parts of the world or densely populated urban areas; that consumers would get cable or subscription channels, including HBO and AMC; and that Wellco’s antennas were the #1 rated indoor HDTV antenna in America.

In addition, the complaint charges that the defendants deceptively represented that consumer endorsements on their websites represent the actual experience and opinions of people who used their antennas. But according to the FTC, the defendants simply copied testimonials from websites promoting competitors’ products.

The defendants also promoted their products with what appeared to be objective news reports claiming to cite independent testing to demonstrate the effectiveness of the antennas. However, according to the FTC, those “reports” were just mocked up to look like news stories.

To settle the case, the defendants have agreed to an order that prohibits a wide variety of deceptive claims about their antennas or any other product they sell in the future. The proposed order also prohibits phony “news” stories and misrepresentations conveyed through endorsements. Based on the defendants’ financial condition, the $31 million judgment will be suspended upon the payment of $650,000.

Tune into these takeaway tips that the case suggests for other companies.

Screen your claims with care when advertising technology unfamiliar to many consumers. One of the defendants’ bogus news stories included this headline: “Seniors Are Taking Advantage of New 2018 Rule That Allows Americans To Get FREE TV In HD, Causing Millions To Cancel Cable.” Other ads tossed around tech terminology without much explanation. When advertising products to the general public, savvy companies factor in that the audience may include both sophisticated purchasers and consumers with less expertise in the subject matter.

Objective ratings representations aren’t mere puffery. Fans of the movie “Elf” will remember the scene when the guileless Buddy heartily congratulates a local diner that displays a neon “World Best Cup o’ Coffee” sign. Contrast that with the defendants’ description that their SkyWire TV Antenna is “The #1 rated indoor HDTV antenna in America.” Because purportedly independent comparative ratings can be highly material to consumers, advertisers need objective evidence to support what they say.