And the Consumer Shield Award goes to . . . 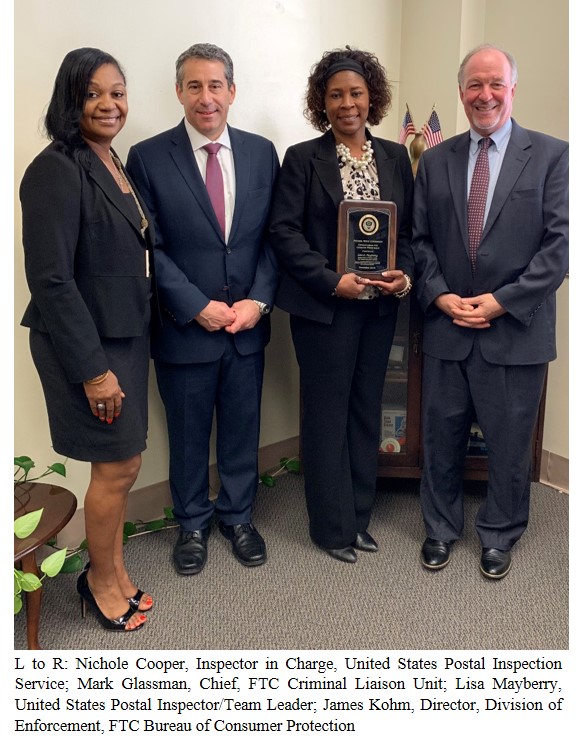 Name the multimillion dollar consumer fraud actions the FTC has filed in recent years and Inspector Mayberry, who is based in the Santa Ana-Los Angeles area, played a key role in many of them. In cases involving deceptively marketed mortgage relief services, unproven health claims, student loan scams, online chicanery, and more, Inspector Mayberry helped the FTC bring to justice numerous defendants who used fraudulent tactics to fleece consumers.

FTC staffers who have worked with Inspector Mayberry praise her unique set of skills. She’s generous with her time and expertise. She’s cool under pressure. And she has an uncanny knack for smoking out scammers – everything from identifying who’s hiding behind a mail drop to figuring out which address houses the clandestine telemarketing boiler room.

We’re proud of our cooperative relationship with the United States Postal Inspection Service, a partnership forged by centuries in service to America’s consumers. And we’re honored to recognize Inspector Mayberry’s contribution to what we have accomplished together. Congratulations, Lisa D. Mayberry, recipient of the FTC Criminal Liaison Unit’s Consumer Shield Award.

Witnessing at what responsible citizens working in Government can accomplish when totally dedicated to fulfilling their call sends a rewarding message of hope to every American. CONGRATULATIONS on your achievements.

I hope politicians can learn from you and devote their time in service to the community. God Bless you.

CONGRATULATIONS on your Rewards