What’s on consumers’ minds is what’s between their ears. A proposed settlement with LearningRx, a Colorado-based franchisor with more than 80 “brain training” centers across the country, and CEO Ken Gibson is the latest in a growing line of FTC cases challenging false and deceptive claims about improved cognition.

Who did LearningRx target in an extensive marketing campaign for its one-on-one programs? In a word, everyone. Parents of kids with autism or ADHD. Students wanting a boost in board scores. Athletes looking for an extra edge. People interested in upping their IQ and income. Patients struggling with stroke or traumatic brain injury (TBI). And older Americans concerned about dementia and Alzheimer’s disease.

On its website, on Twitter and Facebook, in radio and print ads, and in direct mail promotions the defendants claimed that LearningRx pretty much had something for everyone: 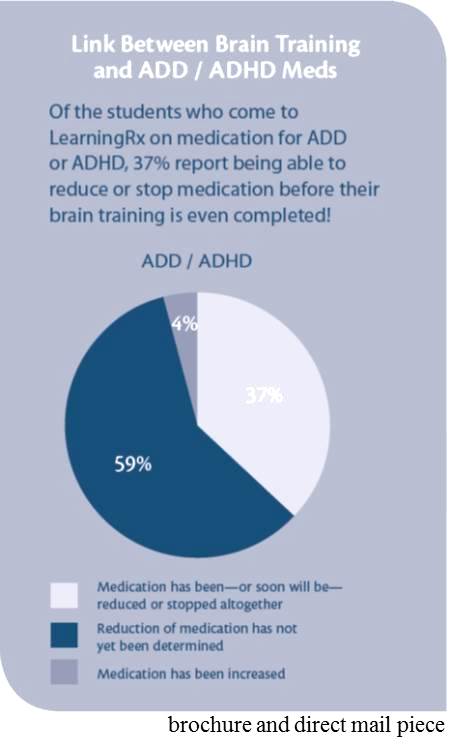 Skeptical? The company claimed to have solid evidence to support its promises: “Our results are clinically proven, scientifically measurable and permanent.” But according to the FTC’s complaint, the defendants didn’t have adequate proof to back up their representations. For the same reason, the claim that the benefits of LearningRx brain training were clinically proven was false.

The settlement imposes a $4 million judgment on the company, which – based on its financial condition – will be suspended upon the payment of $200,000 in disgorgement. If the defendants make any of a long list of claims related to dementia, Alzheimer’s disease, age-related cognitive decline, ADHD, stroke, autism, traumatic brain injury, or improved work or athletic performance, they’ll need randomized and controlled human clinical testing. Other advertised benefits will need to be supported by competent and reliable scientific evidence. (You’ll want to read the order for details and definitions.)

The case offers an important heads-up for other companies. No, it’s not a coincidence. You have seen an uptick in FTC actions challenging deceptive claims about cognition. From babies to boomers and beyond, people are looking for ways to improve their cognitive function, amp up their performance at school and on the job, and stave off the effects of aging. That’s why companies are rushing into the marketplace with purported solutions. But before boarding the brain train, take care to support your claims with solid science.

Please go to www.learningrxftc.com for LearningRx's statement on the settlement

LearningRx has published a response to the FTC settlement at http://www.learningrxftc.com/

Too many people are being unfairly released in one way or another illegally through legal
means by many unscrupulous individuals claiming to be for the individual or family or group.
Democracy and Freedom does not mean setting up, using, destroying another just because
you can. Terrible things happen to people that are not their fault, and then incomes,
the unscrupulous with solutions and cash and money or connections!

It appears that they will keep selling this stuff and get more people to drink the Kool-Aid!

They are releasing more press releases toting their product, including claims of increases in IQ. They don't appear to plan on complying.