Are your FCRA policies worth the paper they’re printed on?

In the words of movie mogul Samuel Goldwyn, “An oral contract isn’t worth the paper it’s printed on.” If your company provides information about consumers to credit bureaus, the law requires that you have written policies in place regarding the accuracy and integrity of that data. But are your policies worth the paper they’re printed on? That’s one of the issues presented in an FTC settlement with Dallas-based debt collector Credit Protection Association.

If a company is covered by the Fair Credit Reporting Act’s Furnisher Rule, it must “establish and implement reasonable written policies and procedures regarding the accuracy and integrity of the information relating to consumers that it furnishes to a consumer reporting agency.” Those policies must be “appropriate to the nature, size, complexity, and scope” of your business. But you don’t have to start from scratch. Appendix E of the Furnisher Rule offers examples of the kind of issues your policies should address.

What happens if a consumer contacts you to dispute the accuracy of information you furnished? The Furnisher Rule also requires you to conduct a reasonable investigation of the dispute and report the results of your investigation to the consumer within a specified time period.

Which brings us to the practices of Dallas-based third-party debt collector Credit Protection Association. If you think we’re going to tell you that the company didn’t have written policies, psych! (Does anybody aside from us still say “psych”?) CPA did have written policies in place – of a sort. According to the complaint, the company failed to address a host of appropriate components, including maintaining records, conducting reasonable investigations of consumer disputes, conducting periodic reviews of a company’s internal practices, and training staff on FCRA compliance. (By the way, all of those things are mentioned in Appendix E of the Furnisher Rule.)

Count I of the complaint alleges that the defendant didn’t live up to its legal obligations because its written policies and procedures – among other things – didn’t consider and incorporate appropriate guidelines in the Appendix.

But that wasn’t the FTC’s only concern. According to the lawsuit, CPA’s process for handling disputes didn’t live up to what the law requires and harmed consumers in the process. You’ll want to read the complaint for the details, but the FTC says CPA didn’t sufficiently train its staff to conduct reasonable investigations of consumer disputes. What’s more, the complaint alleges that CPA routinely destroyed dispute letters and other paperwork consumers sent in, even when the dispute hadn’t been resolved, and didn’t require staff to document key steps they took in investigating disputes.

Of course, it’s not enough just to investigate. The law also requires companies to report the results of their investigations to the consumer within the required period of time. According to the second count of the complaint, CPA was deficient in that regard, too. In numerous instances, CPA simply removed account information after a dispute, without informing the consumer of the action or the results of the investigation. But just hitting the delete key isn’t enough. Consumers who aren’t kept in the loop may not know to take advantage of additional rights they have under the FCRA, including the option of disputing the accuracy of the information directly with the credit bureaus. 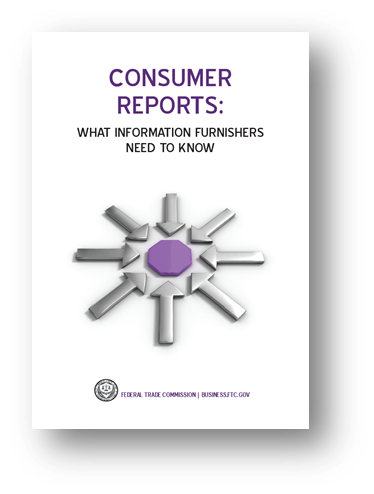 The settlement, which includes a $72,000 civil penalty, applies just to CPA, but the case offers compliance guidance for other companies covered by the Furnisher Rule. The most important message is to make sure your written policies and procedures are worth the paper they’re printed on:

Read Consumer Reports: What Information Furnishers Need to Know for a refresher.

That's true traning staff very important to know and understand our job and policy with procedure are in good hands and conditions as we have all ready printed. And in safe place as for the record keeping always. And my scop of my business.

I completely agree with this post. Some reports are posted like they are FUD crypter or something, one can not understand anything.