Everyone has a job hunting horror story. Ours is the rejection letter we got on a Friday for a job interview scheduled for the following Monday. But a job interview that’s really just a sales pitch, often conducted by software designed to mimic a real person? A lawsuit against Gigats is the latest FTC action targeting deceptive practices in the lead generation industry. 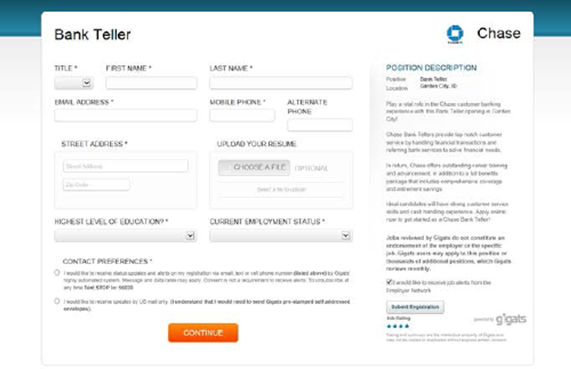 To people looking for work, Gigats appeared to advertise available job openings. A typical listing included a job title, a detailed position description, and the name (and sometimes logo) of the purported prospective employer. Job seekers were directed to submit the kind of stuff expected on an application: contact information, education, and employment status. In addition, the site offered the option to upload a resume.

For many applicants, what they thought was good news came in the form of a follow-up message directing them to call for an “interview” with an “Employment Specialist” about the specific job in question. Here’s where the story takes an unexpected turn because in some cases, the person conducting the phone interview wasn’t a person at all. It was a computer program not so subtly called “SaleMaker.”

For not being a person, SaleMaker was surprisingly personable. Both the SaleMaker software and Gigats’ human Employment Specialists were programmed to falsely claim they had been hired by prospective employers to help with the interviewing process: “We get paid by employers to screen their applicants for them and only send out qualified candidates.”

But at some point in the interview, Gigats had its Employment Specialists and SaleMaker steer the conversation away from the purported job opening and toward education. Here’s an example of how SaleMaker made the segue:

If you had the opportunity to continue your education in a way that did not interfere with your current job search or your family life and if you also found you qualified for financial aid to help with the cost of tuition, is there anything else that could stop you from going back or furthering your education if all of that were possible?

The next step was to transfer interviewees from the Employment Specialist or SaleMaker software to salespeople the company called “Education Advisors” or “Academic Guides.” They represented themselves to be independent advisors there to help interviewees find the best option for further education. But they really just used applicants’ personal information to connect them with schools or programs that were paying the defendants between $22 and $125 a head for leads.

What about those job interviews people were calling for? In fact, Gigats wasn’t authorized to interview applicants on employers’ behalf and didn’t pass people’s information along to them. All Gigats offered was an after-the-fact email with a link to the company’s real job site. But by that time, those jobs were often gone.

The complaint challenges as false Gigats’ claims that people were actually applying for jobs, that the company was acting on behalf of prospective employers, and that its employees were independent advisors searching for the best educational option for people who called.

The settlement prohibits a host of misrepresentations and makes it illegal for the defendants to transfer consumers’ sensitive personal information without their express consent. What about transferring to third parties other information covered by the order? The defendants have to clearly and conspicuously disclose what they’re doing and their relationship to the third party. Most of the $90 million judgment is suspended based on the defendants’ inability to pay, but if the Court finds that the defendants made material misstatements or omissions about their financial condition, the order includes a clause making the $90 million immediately due.

Members of the lead generation industry should take this as one more reminder of the need for transparency. Be upfront with consumers about what you’re up to and don’t use deception to elicit personal information.

Thanks you very much. ..

So what happens in a situation like this who s the decepticon the company ?or Some one only getting paid for being referred by a company for extra side money or is it school tuition fraud they are after and that why they need peoples information? but my question is what are they doing with everyone's info? And why use that company name is it for cover for themselves to attack them. For just a few $$$ doesn't make sense they must want peoples information for their bigger purposes other than chump change this is how other people in other countries get into peoples accounts they have no laws and if they do it isn't enforced like it is in United States. Impostor calls on the phone and their emails And take over peoples identity and confuses the numbers so the IRS confusion overloads. In the past it was happening with people stealing peoples mail fake paper mail being made to look as if it was a real company bill was being sent to people seemingly appeared as a bill so you sent payment and not checking addresses or appearing similar fooled people to send it to some p.o. box or false addressed. I think may be that finding out about peoples worth may be a reason for these predators to think that using the middle man to get references and some cash in your pocket isn't only their intention because getting peoples personal info and using a company name is not their goal getting this info and using the name of this business is way to much to risk if they get caught lets not think of the thief. I think the business should be responsible to keep up with what is and who is advertising their name daily checks ups and searches. Should be a or daily or weekly update to post on line and warn their customers of these thefts and adds should be their responsibility to check for and eliminate what being posted as an iimpostors add or hire someone in all businesses to do just that it should be mandatory for everyone if they want to open a business just so there is something to prevent it if what people do on craigslist independently if you post you are in constantly checking up on your post and ad so as a business they should in constant and consistent check up as an individual selling and buying is needed to checking online because I am checking my post and these businesses are not going to tell me they had no idea this was happening so how does all these people getreimbursed ..OHHH...
insurance companies or as a whole a group of people who want to really fuck with someone life and burn them by destroying what business they built and worked hard for so bringing down this companies name so it does not prosper no future ...hhum....HARD TO FIGURE OUT THE CONNECTION OR in desperation SOME DUMB ASS REALLY NEEDED THAT CHUMP CHANGE????

Gigats.com is still online. The sad part about this is that the true owners were Educationdynamics of New Jersey and Haylard Capital Investment

Haylard Capital is attempting to shield itself via way of SALE. The FTC should go after the TRUE OWNERS. Difrawi was just another LEAD GENERATOR in spite of colorful background known online.