Opiate addiction is a national epidemic, but the public health crisis is only half the story. It also exacts a devastating toll on opiate-dependent individuals and their families. The FTC just filed a lawsuit against a company that claims its “opiate withdrawal supplement” provides “powerful relief” for people withdrawing from prescription medication and even heroin. In addition, the FTC announced settlements with companies that used misleading claims to pitch diet products, including one that attempted to exploit the green coffee bean craze popularized – among other places – on The Dr. Oz Show. The FTC also sent warning letters to sellers of weight loss supplements.

The actions are part of a joint law enforcement sweep with the Department of Justice, Department of Defense, FDA, Postal Inspection Service, and the U.S. Anti-Doping Agency, targeting deception in the marketing of supplements. DOJ’s announcement includes criminal indictments against a Dallas-based company and corporate executives stemming from the manufacturing and marketing of popular workout and weight loss supplements. 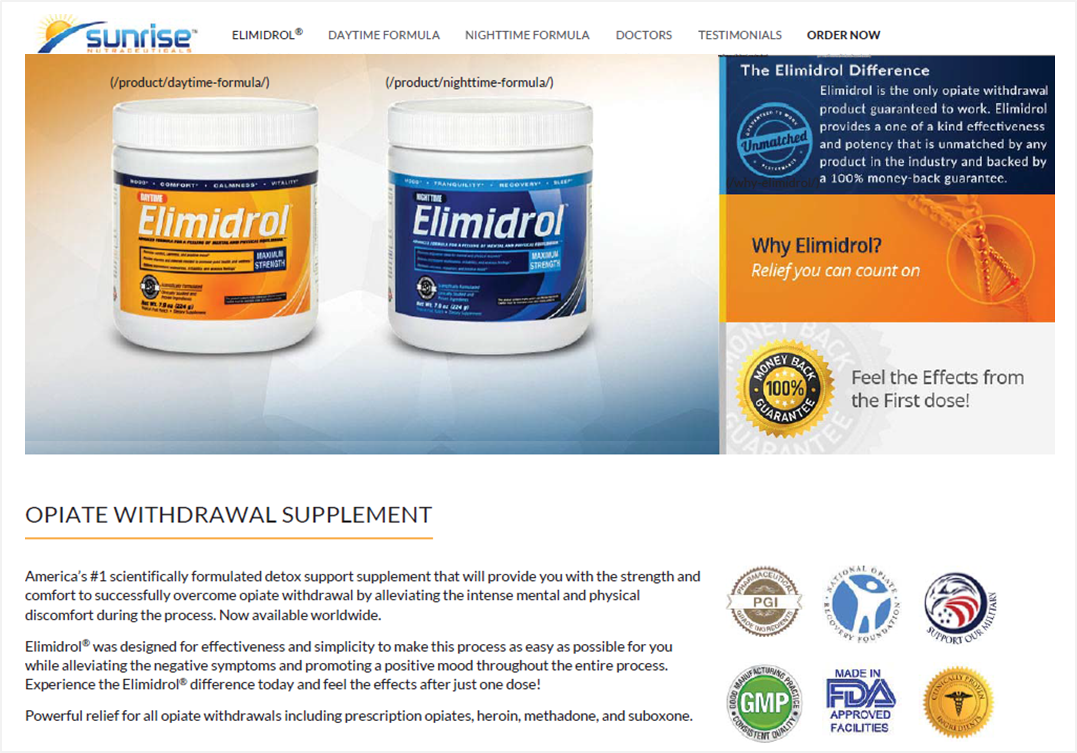 Sunrise Nutraceuticals LLC.  The FTC’s lawsuit against Boca Raton-based Sunrise Nutraceuticals challenges the company’s claims that its “scientifically formulated opiate detox supplement” Elimidrol is “engineered to provide you with the powerful relief you need to overcome opiate withdrawal.” Ads promised Elimidrol would help “alleviate the intense mental and physical symptoms associated with opiate withdrawal.” Furthermore, according to the company, “the effects can be felt from the first dose.” It’s easy to see why a person struggling with opiate addiction would be drawn to claims that Elimidrol would let them “permanently overcome the withdrawal – the first time.” But the pitch didn’t stop there. Sunrise Nutraceuticals also conveyed its marketing message through consumer testimonials that recounted wrenching stories of addiction, relapse, and even arrest. Filed in federal court in Florida, the FTC lawsuit alleges the company made false and unsubstantiated claims that Elimidrol significantly alleviates the symptoms of opiate withdrawal and substantially increases the likelihood of a person overcoming opiate addiction. It's the latest in a long line of cases the FTC has brought to take on deception in the marketing of dietary supplements, including more than a dozen filed in the past year.

NPB Advertising, Inc.   The FTC also announced the settlement of a pending action against Florida-based NPB Advertising. Featured on The Dr. Oz Show and other programs, green coffee bean extract has been touted – deceptively, says the FTC – as a potent fat-burner. Not long after the ingredient was mentioned on Dr. Oz, the NPB defendants launched their product, a supplement called Pure Green Coffee. According to the complaint, they capitalized on the green coffee bean fad by using false claims and bogus news sites to peddle the product. The proposed order imposes a $30 million judgment that will be suspended when the defendants pay $160,800, sell certain assets, and turn over an additional $155,760 loaned to a third party.

Crystal Ewing and Classic Productions, LLC.   There’s also a development in the FTC's lawsuit against Health Nutrition Products and related defendants. The complaint charged Crystal Ewing, five other individuals, and five companies with making false and misleading claims for W8-B-Gone, CITRI-SLIM 4, and Quick & Easy diet pills. The FTC says the defendants used fake scientific studies to claim consumers could lose 20 pounds in just 16 days. This wasn’t Ms. Ewing’s first time around the block with the FTC. The order against the repeat offender and her company Classic Productions, LLC, bans them for life from the weight loss business and imposes a non-suspended judgment of $2.7 million. The order against co-defendant Ricki Black, a former officer and director of non-settling defendant Global Access Management Systems, Inc., includes a $1.6 million judgment, which will be suspended when she turns over her jewelry collection and the keys to her sports car. Litigation continues against others.

Warning letters.  Finally, if you have clients in the weight loss industry, were they among the 20 companies that received warning letters from the FTC about questionable advertising claims? The letters remind recipients of the kind of scientific evidence necessary to support weight loss representations and urge them to review what they say on their websites. The letters also ask the companies to tell us what they’re doing to rework their ad claims.

Coming up:  Compliance takeaways from the supplement sweep

I am happy to know about this action. Too many people and their families are duped into
believing that drugs are the answer. Sometimes before or after surgery, the patient needs the drugs
to maintain until the surgery takes place or the drugs are prescribed to help the patient recover quicker.
My opinion is that the drug companies, could do a better job of working with law enforcement to help alleviate the problems with overmedication and dependency.
.