In the annals of undercover operatives, their work may not be the most glamorous. But the intelligence they glean plays a central role in protecting consumers.

They’re the investigators who conduct periodic sweeps to determine if funeral homes are honoring their obligations under the FTC’s Funeral Rule. In a sweep announced by the FTC, they visited 100 establishments in six localities and found that 27 funeral homes didn’t disclose pricing information, as the Rule requires.

Under the Funeral Rule, funeral homes must provide consumers with an itemized general price list at the start of any in-person discussion of funeral arrangements. Consumers also have a right to get a price list for caskets or outer burial containers before they take a look at those products. What’s more, funeral homes can’t require people to buy an item – for example, a casket – as a condition for buying other goods or services.

Here are the locality-by-locality statistics of funeral homes that failed to make the required price list disclosure:

There’s good news, too. All but two of the 27 homes have agreed to enter the Funeral Rule Offenders Program (FROP) – an innovative program run by the National Funeral Directors Association. Rather than face law enforcement, FROP participants agree to undergo training, testing, and compliance monitoring. They make a voluntary payment to the U.S. Treasury in place of a civil penalty, and pay annual administrative fees to the Association. 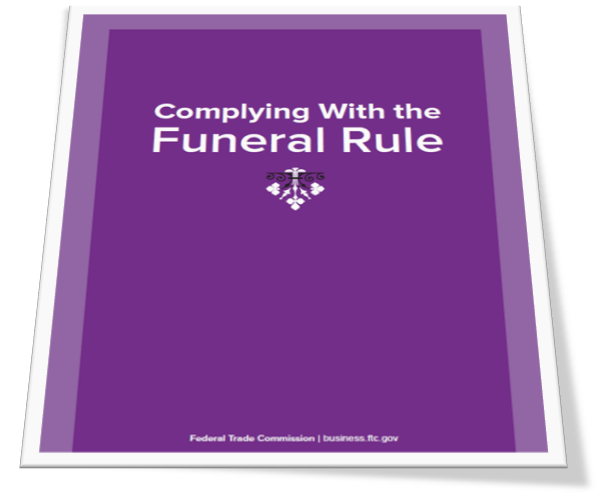 We see FROP as beneficial all around. Future consumers are more likely to get the protections they’re due, companies get the nudge they need to comply with the law, and it’s accomplished at a reduced cost to the American taxpayer.

The just-announced sweep also identified a number of different funeral homes in those states with only minor compliance deficiencies. In lieu of law enforcement, the FTC has required them to provide evidence that they’ve corrected the problems.

If you’re an industry member, have you bookmarked the FTC's Funeral Rule page? Complying with the Funeral Rule offers do's and don'ts for businesses.

The FTC also has resources for consumers about shopping for funeral services. Print a copy and keep it in that just-in-case file of important papers.

Thank you for holding this public service to an acceptable standard. I was so distraught that I do not remember how the funeral home prepared my mother before taking us to pick out a coffin. I do recall the layout of the "showroom." The most elaborate and most expensive urns and coffins were displayed first. Mom wanted the most expensive as she became bored with the least expensive.
Although my dad had been ill for some time and mom had made pre-arrangements (or so I thought), the entire process was aimed at the state of my mom's emotions, exactly what you were checking at the places mentioned. I thought "pre-arrangements" included the choices she was making. She thought it meant having his clothes, etc. ready for them to pick up. This experience was an education for me! I was determined not to have to make emotional choices at such a time. When I knew it was time to think of those decisions for mom, I went to a different establishment. I told the gentleman who assisted me that I wanted to make all of the decisions concerning her funeral that day. I even had a copy of the songs to be played, with instructions about when. I was given a huge catalog that contained packages and a la carte choices to choose from. They included prices. Everything was planned while I was thinking logically and with what I thought would please my mom in mind. When she passed and they very carefully took her away, I had no decisions to make. She and I had sung the music many times together. It was almost as if the funeral were for everyone else, because I had already experienced it. I was a little emotional, but several family members commented that I was composed and made everyone else feel almost HAPPY. Now that is the way a funeral home should prepare a family for the funeral of a loved one. I will be glad to share the name, but I don't know if I am supposed to. A funeral really can be a celebration of the person's life.