A savvy business person always wants to know the shape of things to come. We won’t make predictions but, based on the FTC’s case against multi-level marketer AdvoCare International, we will say this: Don’t bet on a business model that looks like a pyramid.

The FTC says Texas-based AdvoCare operated a pyramid scheme disguised as a business opportunity and swindled hundreds of thousands of consumers who signed up to be “distributors” of its health-and-wellness products. Under a landmark settlement, AdvoCare and its former chief executive will pay $150 million for consumer redress and be banned from multi-level marketing. In the FTC’s long history of actions alleging deception by multi-level marketers, this is the largest company banned from multi-level marketing and only the $200 million settlement with Herbalife was larger. 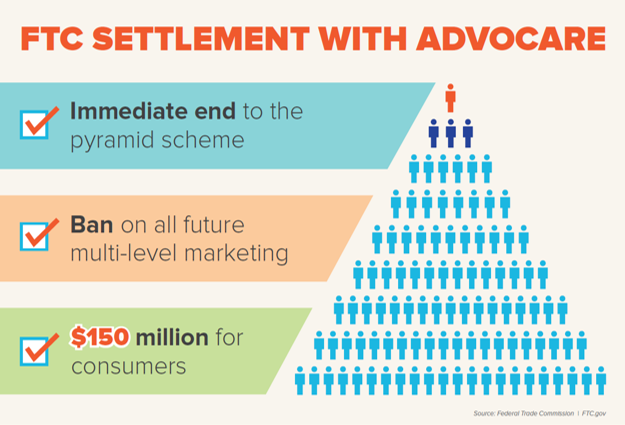 According to the FTC, AdvoCare pitched its business opportunity as a chance for ordinary people to earn unlimited income, quit their regular jobs, and gain financial freedom by selling its products and recruiting other people to do the same. “The sky’s the limit,” a distributor claimed in an AdvoCare recruiting video. “There is no ceiling on our income.”

But, the FTC says, AdvoCare’s main business had little to do with selling energy drinks, shakes, and supplements to the general public and everything to do with keeping a steady stream of new recruits – and their money – flowing into the business.

According to the complaint, AdvoCare’s compensation plan required distributors to buy thousands of dollars’ worth of AdvoCare products to be eligible to receive cash bonuses and other rewards. The rewards, however, were driven by the number of people the distributors recruited, and how much inventory their recruits – and their recruits’ recruits – bought from AdvoCare. The result? The FTC charged it was a classic pyramid scheme that compensated distributors for recruiting, rather than for retail sales to customers who actually wanted to use the product.

And what about life-changing paychecks that AdvoCare claimed distributors could earn? According to the FTC, more than 90 percent of the distributors had annual earnings of less than $250. When distributors’ substantial costs are added, nearly all of them lost money.

In addition to the permanent ban on multi-level marketing, the settlement order requires the defendants to notify all AdvoCare distributors about the FTC’s lawsuit and settlement and advise them that:

In addition to AdvoCare, the settling defendants are Brian Connolly, AdvoCare’s former CEO, and Lisa and Carlton Hardman, who were leading promoters of the AdvoCare business opportunity. To resolve the charges against them, the Hardmans have settled with the FTC for $4 million, most of which is suspended, based upon their inability to pay, and a ban on multi-level marketing. The FTC’s case against Daniel and Diane McDaniel, also leading AdvoCare promoters, is continuing.

The case offers lessons for both business opportunity sellers and potential buyers.

For tips about spotting and avoiding pyramid schemes, check out the FTC’s guidance.

So what now? I've been a distributor with Advocare and lost plenty of money on product etc...for 19 years. Wha twill I need to do to get recourse?

The settlement order requires the defendants to notify all AdvoCare distributors about the FTC’s lawsuit and settlement and advise them that they will no longer be able to earn compensation based on purchases by distributors in their downline.

If you had significant losses pursuing your AdvoCare business, you may get some of your money back through the FTC settlement. The FTC will contact eligible distributors. If you decide to end your participation in the business opportunity, AdvoCare offers a 100 percent refund on unused products.

And What if Advocare terminated your distribution for violating their questionable contract?

I am a distributor for AdvoCare and have not been notified at all as of this date. Are the products still available and what can I do with the products I cannot sell or use up?

Who do we contact to return unused products, I was never notified?

Will previous advisors with Advocare also be compensated? I lost a lot also however I did not renew a few year's ago.

I have been an advisor with Advocare for over 8 years. I struggled and worked my tail off believing in the dream. I recruited a large team after being told I was better off recruiting rather then just direct sales which in actuality I would have been much better off. I invested countless hours of time and money into this business, sometimes driving to 3 counties in a day working on recruiting. What really gets me now is that they have basically stolen all my recruits for their own compensation. So the little I did earn is now completely gone. How do I join this lawsuit?

I feel you. Lost all income. All for nothing

I, too, pursued my false dreams for Advocare. I've email the link that has been shared so hopefully I can respond with some answers soon.

I have been an Advocare advisor for over 14 years. I joined with the promise to earn unlimited income and to be able to quit my full-time job. I spent thousands of dollars with Advocare and lost a lot of money attending events in other cities and states. I was told to be successful in the business that one must attend all of the company events and continue to buy products. I lost a lot of money pursuing the Advocare business over the last 14 years and would like to join in the lawsuit. When will the FTC start contacting eligible distributors and how can I learn more about potential recourse?

I used to be a distributor AdvoCare

I was a victim of AdvoCare as well as many others. My up line supervisor insisted that in order to make money which I was trying to do to throw myself a 50th birthday party, that I must go all in immediately and skip the Distributor level and become an advisor. This was in October 2014, My birthday was March 2015 so I went with it hoping that I would have a really great 50th birthday party. However once my products arrived, I asked for help as to what I needed to do next to make my money. My up line supervisor began to get rude and ignored Me and pretty much left me on my own with over $2000 worth of product. Needless to say I sold very very little and ended up with quite a bit of stock that expired. She also insisted that I had to go to Texas for success school if I wanted to know the inns and outs of AdvoCare. That was another $900 Space out of my pocket that I really didn’t have but I was desperate because time was of the essence not only for the product but for the money that I had wasted. She even encouraged me to purchase two banners at $125-$200 apiece saying it would help me advertise. I began to become very frustrated and in 2016 I decided to finally throw in the towel after I had spent at least $4500 in the business and didn’t see more than a total of $300 in checks that came from what my downline ordered. I am so thankful that the FTC has gotten involved, I have felt so hopeless and sometimes depressed over the money that was wasted. Needless to say I was not able to have that 50th birthday party. I hope all involved get what is coming to them starting from the top of AdvoCare to the poor distributors And advisers such as myself it was not right what they were doing and I didn’t know who to turn to.

>>> same with It works global. Forcing you to events and buy products. 80% of ppl don’t make nothing and put in more money than they make in their checks. >>> I have been an Advocare advisor for over 14 years. I joined with the promise to earn unlimited income and to be able to quit my full-time job. I spent thousands of dollars with Advocare and lost a lot of money attending events in other cities and states. I was told to be successful in the business that one must attend all of the company events and continue to buy products. I lost a lot of money pursuing the Advocare business over the last 14 years and would like to join in the lawsuit.

If I have substantive evidence of almost identical scheme occurring that is effective family, who can I speak to directly or coordinate?

You can report a problem to the FTC at www.FTC.gov/Complaint. The information you give goes into a secure database that the FTC and other law enforcement agencies use for investigations.

I lost about 4k start up and even more on product because I was stupid and bought into Levi's lies... I was a new mom and the promise of help, guidance and financial benefits hooked me into maxing my credit card to start. I cancelled my distributorship and stopped using the product after my husband ended up with a small bowel blockage due to their fiber drink! What shoild I do? I haven't received any notice or mailing as of yet.

How do I get reimbursed?? I bought in to be a distributor for them??

What is the status of these refunds? How long do you expect the process to take to process the refunds?

What is the status of the settlement? When should we see compensation for our losses?