Recipe for a ROSCA violation

From the FTC’s perspective, a certain pattern of online business has become a recipe for consumer injury.

It’s an unappetizing entrée that leaves consumers queasy. And it’s a marketing scheme the FTC has challenged yet again – this time in a lawsuit against Puerto Rico-based Gopalkrishna Pai and eight companies he owns, alleging violations of the Restore Online Shoppers' Confidence Act (ROSCA).

The main ingredients in this case were online “risk-free” trials of skin care products sold in pairs – Vita Luminance and Regenelift, Derma Vibrance and Nuevoderm, Revived Youth Cream and Revived Youth Serum, and Aura Youth Cream and Aura Youth Serum. According to the FTC, the check-out pages led consumers to believe their credit cards would be billed just for a $4.95 shipping and handling fee. Below the large turquoise COMPLETE CHECKOUT button were two small line of grey type that said “Initially, just pay $4.95 for S&H today to fully evaluate Vita Luminance Cream for fourteen (14) days. We know that you’ll love your smooth, wrinkle free skin. You will receive your product within 5 business days.” 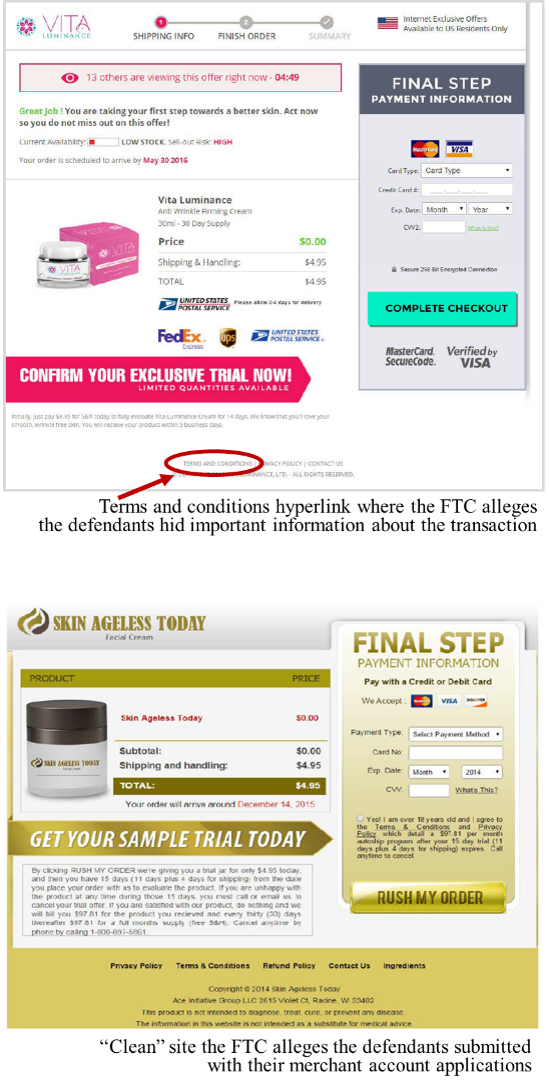 But there was something buried even below the already hard-to-read fine print: a tiny “terms and conditions” hyperlink. Only by clicking on that obscure link would consumers learn that at the end of the 14- or 15-day trial period, the defendants would charge them the full price of the product – $90 or more – and enroll them in an auto-ship program with recurring charges until they cancelled.

The FTC says the illegality didn’t end there. The defendants supersized the misleading deal during the check-out process by claiming to offer another “risk-free” trial of a second product that promised to “maximize your results” for another $4.95 shipping payment. But according to the FTC, that second offer came with the same strings attached, the same unauthorized credit card charges, and yet another undisclosed auto-ship program.

The defendants said on their websites that consumers could cancel anytime by phone or email, but the FTC says that claim, too, was poco fiable – not reliable. In fact, many of the customer service reps consumers reached spoke only Spanish and the recorded messages on some of the defendants’ phones were only in Spanish. Even if consumers were able to speak with an operator, the FTC says people often received only a partial refund or no refund at all and in many instances the onslaught of unordered merchandise continued.

The complaint also alleges that, to get the merchant accounts he needed to process credit and debit card sales, defendant Pai used more than 100 phony names in an effort to camouflage his operation from payment processing entities and banks. One favorite trick: falsifying employer identification numbers to hide the fact that he was behind all of the accounts. According to the lawsuit, “By doing so, Pai shielded himself from consumer complaints and chargeback disputes related to sales processed through his LLCs’ merchant accounts, thereby evading detection from consumers, financial institutions, and law enforcement.”

That wasn’t his only attempt to hoodwink the payment system. According to the complaint, Pai had “clean” sites he showed just to merchant processors – sites that differed markedly from the sites consumers saw. The FTC says those sites were there just for show and didn’t result in product sales.

By now, online marketers should be aware of the requirements of ROSCA. The law bans online negative options unless the seller: 1) clearly discloses all material terms of the deal before obtaining a consumer’s billing information; 2) gets the consumer’s express informed consent before making the charge; and 3) provides a simple mechanism for stopping recurring charges. Another thing marketers should know about ROSCA: the FTC’s continued commitment to challenge violations.

I feel victim to these schemes

Some companies seem to think this is ‘THE NEW BUSINESS PLAN.”

The upside is it encourages each of us as consumers to : SHOP LOCAL.

Thank You for looking out for us & stay blessed.

You should add and investigate a company operating out of Stafford Texas by the name of Luminess Air they do the same thing. When I ordered I was never informed that the product was going to cost me an extra $40 per month for 3 month and that I will be also joining a monthly membership of an extra $49 for a total of $89 per month. When I called the company to cancelled the order and make sure they understood I have not legally agreed to this terms the representative was extremely calmed and well trained on how to handled the call. You can tell they get this type of call on a daily basis and they know how to confuse the consumer and get around it. I can only imagine how some consumer may feel when they talk to Luminess Air representative as they make you feel ignorant. I would like to file an official complaint for this company and their cosmetic products. Thanks in advance for your kind consideration. Nelly Mitford

To report a problem to the FTC, go to www.FTC.gov/Complaint. The information you give will go into a secure database that the FTC and other law enforcement agencies use for investigations.

I got hit with a charge of over $200 against my debit card. I did not notice all they small print when I signed up. When I called the company regarding the charge I was told "tuff poop (crap). Rather than waste my time with canceling the debit and all the paper work I just went ahead an swallowed the charge. THE PROBLEM IS -- THIS PRODUCT DID WHAT IT WAS ADVERTISED TO DO!! THE PRODUCT WAS EXPENSIVE BUT IT WORKED. SUCH A WASTE OF GOOD PRODUCT. NEVER AGAIN.

Regarding your latest posting Recipe for ROSCA Violation". Once again I'm lucky that I subscribe (for free) to your website. This new information I read in the ROSCA Violation could easily.have pertained to me at any given time!! Now I can safely say it absolutely will not. I'm always glad I subscribe to your site as you have helped me (directly) in the past and your articles and posting updates continue to help to this very day. As with the aforementioned, I do enjoy treating myself now and again to new skin care creams. (Which is a rare pleasure with what they can cost). So far I'm happy to say that I have been lucky In what I've chosen to trial order and have had no issues. However, as I've already learned, I dare not stretch that luck any further! Certainly not in these days and tImes.

While I'm here on my FTC site, may I once again thank you!!! With the interest rates given out these days I would have to say that this site is my BEST Savings Account!

I have been scammed out of thousands of dollars through the last year from many of these types of scammers.
Thank you for looking into this to help us honest folk.