Laidlaw v. Organ was an 1817 Supreme Court case concerning an allegedly deceptive trade practice affecting a small business. You may be surprised to learn who argued that case and why it’s relevant 201 years later.

Counsel for one of the businesses was a young Maryland attorney named Francis Scott Key. Yes, that Francis Scott Key. After the defense of Fort McHenry inspired him to pen The Star-Spangled Banner, he returned to his law practice and later became a United States Attorney. Today the FTC presented its Criminal Liaison Unit Prosecuting Attorney Award to Sean R. Delaney and Harry M. Gruber, Assistant United States Attorneys with the Office of the United States Attorney in Maryland. And if you can manage another coincidence, AUSAs Delaney and Gruber received the award for their efforts to bring to justice nine individuals charged with fraudulent practices that targeted small businesses. In this case, the defendants bilked offices, nonprofits, churches, and schools out of more than $50 million by sending them unordered supplies and then using arm-twisting tactics to demand payment. 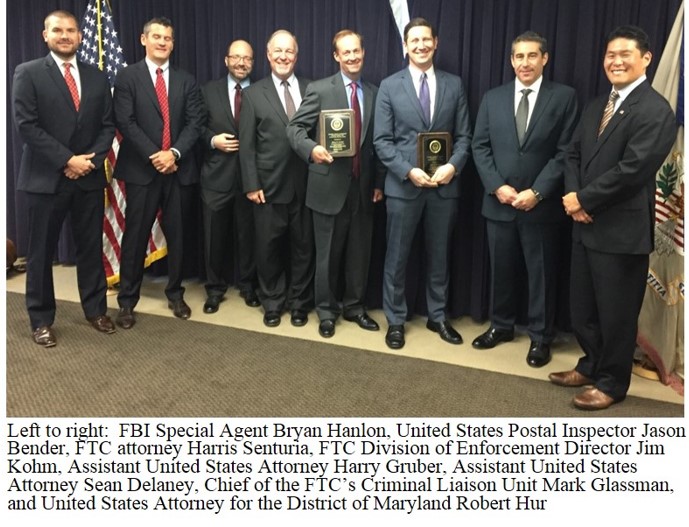 That scammy strategy should sound familiar. The FTC had previously taken action against several of the defendants and their companies in FTC v. Midway Industries. That case resulted in permanent injunctions, a $44 million judgment against one defendant, and a $58 million judgment against the rest of the lot. The FTC intends to return funds it collects to the defendants’ victims. (We also have a brochure with tips on protecting your small business from B2B scams.)

With Mr. Delaney and Mr. Gruber serving as counsel, the U.S. Attorney’s Office for the District of Maryland obtained guilty pleas to multiple fraud-related crimes from nine criminal defendants involved in the scam the FTC had challenged civilly. The defendants received varying sentences, with Eric A. Epstein sentenced more than 11 years in prison.

Every two years the FTC presents the Criminal Liaison Unit (CLU) Prosecuting Attorney Award to recognize prosecutors who demonstrate an exceptional commitment to consumer protection in partnership with the FTC. Since its inception in 2003, CLU has contributed to the successful criminal prosecution of hundreds of fraudulent telemarketers, phantom debt collectors, mortgage relief scammers, and others con artists who prey on American consumers.

One footnote: Despite Francis Scott Key’s efforts, the Laidlaw case ultimately resulted in a remand. But thanks to Mr. Delaney and Mr. Gruber, justice prevailed in this 21st century challenge to deceptive practices targeting small business. And for that, so proudly we hail our 2018 CLU Prosecuting Attorney Award honorees.

FTC is wonderful. I believe in you.

It the best. Knowing they are. Good person giving there Time. For América and thanks to all of you we still need more. Hard working person like all of you I not. No body. But. I need. To believe in justice thanks

This is perfect example of illegal revenue. ie, just because a company shipped the goods or provided the service, sent an invoice, got paid, put the check in bank, DOES NOT mean that the revenue was legally earned.

Outside audits are required to plan and perform the audit to have a reasonable assurance the financial are not materially misstated. Does FTC ever require outside auditors to assure compliance with settlements? On ANY settlement, not just this one? Why not?

Auditors are REQUIRED to assess risk EVERY YEAR EVERY CLIENT. Did the outside auditors perform the required risk assessment? If not, they didn't have the authority to issue an opinion.

How much jail time did they get? How much restitution did they pay? Ten percent or less?

What is the purpose of FTC? I have so many questions about it.

You can read about the FTC's history, Commissioners, Bureaus and more by clicking on the blue bar that says "About the FTC" at the top left of this page.