FTC recaps consumer complaint data for 2017: Who’s on the list?

Once bitten, twice shy. That fundamental principle of human behavior is why reputable businesses that work hard to earn consumers’ confidence should support the FTC’s ongoing efforts to fight fraud. According to the FTC’s 2017 Consumer Sentinel Data Book, consumers reported losing a total of $905 million to fraud last year. That’s close to a billion bucks people won’t be able to spend on legitimate products and services from credible companies. 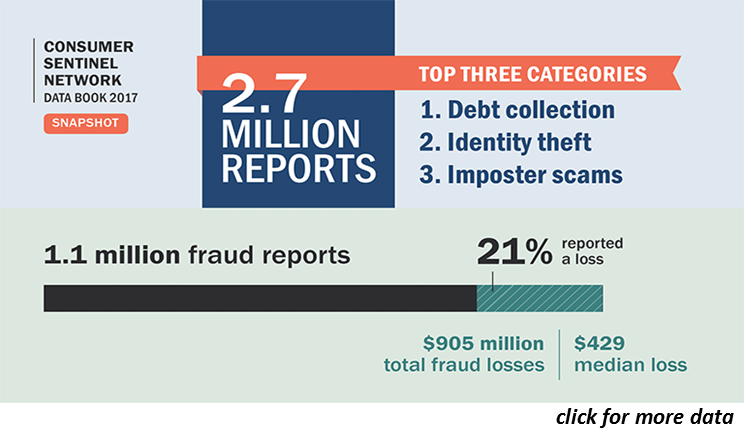 Topping the list that no industry wants to be on is debt collection, making up 23% of the total number of complaints. But there are two caveats: 1) that number is down from 2016; and 2) the high number of debt collection reports was due in part to reports submitted by a data contributor who collects complaints via a mobile app.

Second on the list is identity theft at 14%. The injury to consumers came in two equally unpalatable flavors. Credit card fraud was the most common manifestation. Tax fraud was next, but the glimmer of hope there is that the total number of tax-related identity theft complaints fell by 46%.

Winners of the dubious bronze medal were imposter scams, with consumers reporting financial losses of a whopping $328 million. Imposters wear many masks: “I’m with [big-name tech company] and your computer is riddled with viruses,” “Help, Grampa! I’ve been arrested and need bail money,” and “We’re from [government agency] and we’ll arrest you if you don’t pay us today.” Nearly one in five consumers who reported an imposter scam said they lost money to the fraud.

For the first time, the Consumer Sentinel Data Book breaks out fraud losses by reported age groups and here’s a result that may surprise you: Consumers in their 20s reported losing money to fraud more often than those over 70. Among 20-somethings who reported fraud, 40% said they lost money. Compare that with the over-70 crowd, only 18% of whom reported a financial loss. But there’s a troubling aspect to that surprising factoid. When older adults did report losing money to a scammer, the loss was much greater. For example, people 80 and older reported median losses of $1,092 compared to $400 for those in their 20s.

Wire transfers continue to be scammers’ preferred payment method and in 70% of the complaints we received, the fraudster contacted the consumer by phone.

The top states for reporting fraud were Florida, Georgia and Nevada, while Michigan, Florida and California had the most reports about identity theft, per capita. Stats cats tell us that they find our state-by-state data dive helpful, so we’ve created a new webpage to make it easier to evaluate the information.

The bottom line for business people:

Why has AT&T not hired assistance within our own borders, we have a working class that would welcome such a position AT&T ...yet jobs are being shipped abroad and all to save a few pennies on labor cost...

That seems to being going a lot. Most of the job have test that don't even make sense.