Certain advertising terms are bound to attract consumer attention: “free,” “no diet or exercise required” – and for people in the market for mobile data plans, “unlimited.” The FTC’s settlement with TracFone Wireless will return $40 million to consumers whose unlimited service was throttled or cut off. What can your company take from the case?

TracFone is the country’s largest prepaid mobile phone service provider with approximately 25 million subscribers. Since 2009, TracFone has advertised unlimited service using a variety of brand names, including Straight Talk Wireless, Net10 Wireless, Simple Mobile, and Telcel America. The centerpiece of TracFone’s ad campaigns was “unlimited talk, text, and data” – sometimes described as “unlimited everything” – for about $45 per month. Sure, phone and text services were attractive selling points. But consumers were particularly drawn to unlimited data plans so they could surf the web, stream videos, and use mobile apps without worrying about how much data they used. 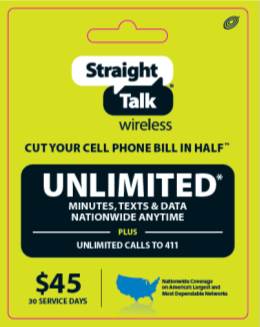 According to the FTC, TracFone broke the “unlimited data” promise it made to millions of consumers by substantially reduced the speed of their service if customers went over certain fixed limits in a 30-day period. Throttled customers often experienced slow-downs of at least 60% and sometimes even 90%, significantly impairing their ability to engage in the very activities people buy a data plan for. Customers whose service was cut off couldn’t send or receive mobile data at all.

Once people began to approach the company's fixed data limits, TracFone would send them a prerecorded voice message. Rather than describing the company’s data throttling policy, the message just said something like this: “If your excessive data use continues, we may need to suspend or deactivate your data service or terminate your phone service altogether as specified in the terms and conditions of service. . . . ”  But according to the FTC, even TracFone’s terms and conditions often didn’t disclose how it limited customers’ data service.

What’s more, the FTC says that until at least September 2013, most TracFone’s ads didn’t explain the throttling policy at all. After that, TracFone started to disclose some information, but not in a way that was clear and conspicuous to consumers. For example, the FTC alleges that TracFone buried it in fine print away from the much more prominent promise of unlimited data or put in on the back of packages where people were less likely to look.

Did TracFone’s policy apply just to a tiny percentage of particularly data-hungry customers? No. According to the FTC, TracFone throttled the mobile data service of millions of customers and suspended the service of hundreds of thousands more. Furthermore, the policy had nothing to do with network management and everything to do with an internal TracFone business decision “to control excessive data usage and reduce the high costs related to it.”

The complaint charges that TracFone violated the FTC Act by advertising unlimited mobile data service while failing to disclose – or failing to adequately disclose – that it imposed material restrictions on the quantity and speed of data for customers who used more than a fixed amount in a given service period.

The settlement requires TracFone to clearly and conspicuously disclose any limits on the speed or quantity of its data service. In addition, the settlement establishes a $40 million fund for customers whose service was affected. Consumers can get more information about the refund program at ftc.gov/prepaidphone.

What can other companies take from the TracFone settlement?

Has anybody, did anybody or do you know of anybody who actually receive any compensation of any kind from this consumer fraud case? Most every person that I know uses Straight Talk, not one person did or knows of any one who was compensated in any was from this case. No communication what so ever.
It leads me to believe that due to many people do not register their cell phone, was this one way of tracking people for statics?
I'm sure that the "general population" is not going to see a penny of that $40 million. After the lawyers and government are finished there will be nothing left except for all of our information that we provided to be sold to the highest bidder.
Please if anyone out there has received any correspondence please reply.
Thank you
Jackie

I have bring your own phone with Straight Talk. One for myself & one for my mom. Her phone is supposed to have internet on hers so we pay $45 for hers & mine. The $45 plan I hafta get for her will not connect to the internet but they won't allow me to purchase the $30 plan for her. She is 74 years young & all she uses it for is to make & receive calls. She does not txt & cannot get pictures of her great-grandkids. $45 is a crappy price for so little use. I have the $45 plan & my everything gets slower & slower for less & less use. I always add my refill card a few days ahead of time & this time I only got 11 days b4 they txt & said I was being slowed down.I am disabled & dropped one company bcuz they were charging me more than the agreed upon price. With extra taxes & surcharges they were eating me alive!!! The lady I spoke with this evening told me that I needed to turn my phone off bcuz it still eats all kinds of data while still turned on! How in the bloody hell am I supposed to get a call if I am sposed to turn it off all the time? I could complain for a very long time but since I started using Straight Talk after the cut off & only found out about the refunds tonite I am pretty much done for. Still I feel a bit better since I got some off my chest. Thanx!

I applied for a refund before the deadline now what happens.

I received a check in the mail today for $15.11 and I have spent thousands of dollars throughout the years.

I received a check for $15.11 last week. I do remember my phone was cut off a day or two after I bought my new phone and called them and they said I was misusing my data time. I didn't think I was on it that much. I did see that the phone got was new to me and didn't know that the data was turned on all the time. I didn't know the difference at the time. I don't remember filing. I just wanted to make sure it was a real check before I cashed it and if my service will change if I cash it.

I completed my request as a Straight talk client but never received anything????

Straightalk is aweful. I have used them for years and they are only getting worse. It seems like every time I call them or text them to complain about my data or phone connection it just gets worse. More of my calls are getting dropped or doesn't even connect, and my highspeed data is a joke. You buy a whole month but only seem to get 2 weeks. I bout the 55 dollar and only got 3 more days of highspeed. Straightalk is just aweful.

I knew from the time that I had my services and still do that something wasn't right , even when I called about it they kept lying to me as if I didn't know what I was talking about they even blamed it on the new cell phone that they sold me , how do I find out about these scammers that i may get all my money back or at least a half of it ? Scammers wow .

I've used straight talk for two years now and I've always had data issues and it never was a truly unlimited plan... who do I contact to file my claim against them thieves??

I am having trouble with may service from tracphone, First bought a kit and it was no good 2nd bought a new tracphone with 1500 data 1500 talk 1500 text and only got 500 data 1500 talk 1500 text and the 500 data was gone in one day I could not get voice mail or picture text, The company said i used 1500 data my first day, Even though I only recieved 500, The manager with no last name never heard anything I said, I will go higher for sure.

Guess I can add myself to the misery. SafeLink phone, and was purchasing online UNLIMITED across the board for 39.99+ etc. for months . Noticed throttling also. Went to add my monthly and it was gone. Several emails to "corporate" and they told me it would be back 5/7/19. Didn't happen. Emailed again. Will be back after 5/15/19. Today is the 16th and NO UNLIMITED PLAN !! They are liars. Falsely representing themselves. What a scam. What's a body to do?

I was about to throw this two month-old phone against the wall and reconsidered, thinking about the money i spent on it.

GLAD to hear i may be able to get a refund, for this LOUSY "unlimited" service.
The WORST Plan i have ever experienced!!!

It's 2019. Tracfone is still doing this practice. My data abruptly switched to 3g mid last year. I can't use my phone app to clock in for work, I miss important business calls, and it has put me in dangerous situations when I need communication. I usually get anywhere from speeds of .5 to 2 Mbs. For my Straight talk phone I had for three months I used 0.0 Mb of data and paid for unlimited. Then I switched to Total Wireless, a different Tracfone provider. Same issue. This is insane. Phone and internet use is needed to create a level playing field. Most things are done online or by phone such as paying bills and working. This kind of deregulation of the market is exactly what is leading to collapse of this country as a whole. Please do something about this FTC. Also if anyone knows of a class action I can get on, please post here.

Oops I bought Tracphone and realized there is no unlimited Data plan. Im going to switch and just get a new phone and new company.

I thought unlimited meant no limit can't this fraud