Arizona-based Opendoor advertised its iBuyer service to people looking to sell their homes. The pitch: Opendoor’s cutting-edge technology would save sellers money by providing “market value” offers and reducing transaction costs. According to the company, “We don’t try to make ‘low ball offers’ because, unlike a home flipper, our business model isn’t based on buying low and selling high. The way we make money is by charging a fee for our service” – a process the company described as “transparent, fair, and accurate.” 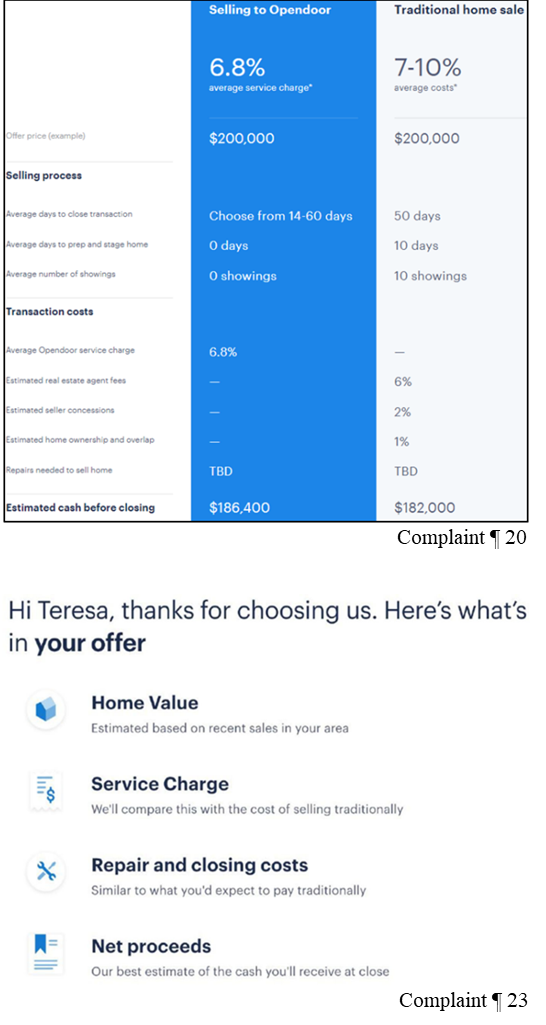 Once homeowners expressed initial interest, Opendoor sent them eye-catching charts that claimed to show a side-by-side comparison between customers’ projected net proceeds from selling their home to Opendoor versus selling it “traditionally” by listing on the market. The FTC says the charts almost always projected that homeowners would get thousands more by selling to Opendoor. As the complaint alleges, “As of November 2019, over 90  percent of these charts used in accepted offers projected that the consumer would realize more net proceeds by selling to Opendoor. The average projected gain was more than $6,000.”

That’s how Opendoor promoted its services, but the FTC says that’s not how it panned out for most people. According to the complaint, “In fact, the vast majority of consumers who sold to Opendoor lost thousands compared to what they would have realized in net proceeds from selling on the market because Opendoor’s offers have been below market value on average and its costs have been significantly higher than what consumers typically pay.”

The complaint alleges that Opendoor engaged in practices that both increased the costs to customers and reduced offers to below market value. Opendoor’s approach to home repairs is one example. The company told prospective customers that after an in-person assessment of the property, it may require them to make or pay for certain repairs. However, Opendoor also said that it “ask[s] for the repairs we anticipate the next buyer of the home will ask for” – fixes that customers would have to address before a traditional sale, too. Opendoor further claimed that consumers may even save money on repairs if they sell to Opendoor because “we do our best to pass wholesale savings on to you from our partnerships with local vendors.” But according to the FTC, Opendoor’s required repairs often cost thousands more than what people would have to pay before a traditional sale.

Furthermore, the FTC says Opendoor often took steps that reduced its offers to below what the company’s own internal valuation system determined was the home’s market value. You’ll want to read the complaint for details, but the allegation is that in many instances, the company “adjusted offers to two percent below what Opendoor assessed as market value” – a practice that contradicted what it told homeowners.

To settle the case, Opendoor will pay $62 million, which the FTC will use for customer refunds. Among other things, the proposed order prohibits misrepresentations about what homeowners will have to pay and requires Opendoor to have appropriate substantiation to support claims about the costs, savings, or financial benefits associated with using its service, including any comparisons to traditional home sales. Once the proposed settlement appears in the Federal Register, the FTC will accept public comments for 30 days.

What’s the key takeaway for other businesses? Too many companies that sell goods or services online or operate web-based platforms think that established consumer protection principles don’t apply to them. That’s a major mistake. Fundamental truth-in-advertising standards protect people regardless of how companies choose to market their services.

Finally , some justice in the USA with these companies , that take away from our Realtor professionalism and make a bad name for the industry. Finally some consumer protection .

We sold our home to Opendoor and thought we were ok but ended up getting ALOT less at closing, when its too late to reconsider.

How do consumers that used opendoor get a piece of this settlement.

In reply to How do consumers that used… by Eric Fitzgerald

Made to do costly repairs some not necessary and sold well above price given to me.

How and when will these refunds be delivered?

Finally! They've been getting away with these lies for years! Well done, FTC!

Please foreword me information as to how to Pursue settlement.

My wife and I were bitterly disappointed at Opendoor. We sold our home to Opendoor in July 2018 and were convinced we would be getting the most money back possible. We ended up paying approx $17,000 for Repairs that "the new owner would ask for anyway". Would we use them again? The answer is a resounding NO! Our home was in Lewisville, Texas

We sold our AZ home to Open door in July of 2019. I remember the charts and the inspection. We were purchasing another home, a new build still under construction. I asked why I had to commit to an offer price 7 months ahead of our closing date? Didn't make sense. Why couldn't they give me a (better, realistic) price closer to closing date? Inspection by them had been completed, but no inspection report was ever uploaded to portal for 4 months! Surprise, here's the repair cost! In the end, same model home w/ a pool like ours closed for $15K more the same week we closed and they went the traditional route. We also had to chase the $1K their preferred Title company held back for "extended close." Supposed to be mailed and received w/in a week of closing. Took almost a month. Probably hoping we'd forget about it with the move and all. Yeah, what documentation do consumers need to provide in order to get some cash back?

how do we get more information about the settlement to open door?

I sold my house to Opendoor total sale cost me $63000.00 They did not include the cost of the Solar lease which l had to pay myself over charged for non existent repairs. I did not know who the buyer was until the day l signed the sales contract. Looking forward to a large refund check

Sold in October 2018. How do we go about getting the refund?

Who will get refunds from Opendoor settlement? How? When?

Has anyone figured out how/what to do in order to be a part of this settlement yet?

I thank God that we caught on to them in time. We were offered more than $40K more than expected. However after having my realtor look over the contract (after we signed) she encouraged us to hurry and terminate contract. The extra money we thought we'd receive were all going back to Opendoor at closing. They had every fee you could think of charging to us. While telling us they're covering everything. Also in the contract my washer dryer and stove was included stating we agreed to leave. We NEVER discussed any such thing. They picked what they wanted in your home through virtual tour. I am so happy that we got out of that contract in time. We would not have had any funds left over to put down on new home. I am so very happy that FTC stepped in and saved many more consumers.

I sold my home to Open door in 2020, how do we submit a claim for reimbursement?

I sold my house to Open Door in 2020, how do we seek information in submitting a claim for reimbursement?

We sold our home Dec 2021. We were charged for items (deducted) in price and saw they never fixed things

How can I get info on the lawsuit

We sold our home to open door in April 2019. How do we submit a claim