Take a closer look at some of the companies that publicly proclaim to “Support Our Troops” and you may find illegal conduct suggesting that a more accurate slogan for them could be “Thwart Our Troops.” The FTC and 18 states just announced a settlement with Harris Jewelry, a national retailer alleged to have targeted military families with a host of deceptive and unfair practices, including violations of the Military Lending Act. Among other things, the company must stop collecting millions of dollars of debt, provide refunds for purchased protection plans and refunds for overpayments, and once its obligations under the order are met, complete its shutdown of operations and dissolve pursuant to state laws.

Harris Jewelry and its corporate affiliates have sold jewelry, watches, and military-themed gifts from its stores, strategically located on or near military bases. According to the complaint, the defendants’ practice was to extend credit to active duty service personnel, National Guardsmen, Reservists, and medically discharged servicemembers. How laser-focused was Harris Jewelry on selling that way? The FTC and the States allege that about 90% of sales were through credit transactions financed by Harris Jewelry or its affiliates. 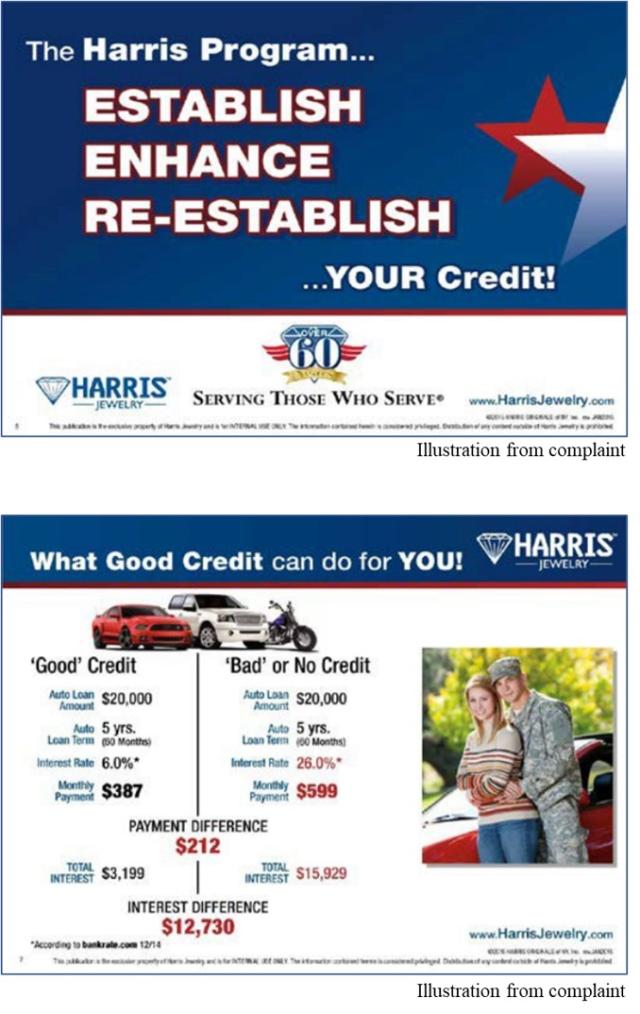 According to the complaint, Harris Jewelry – which used the slogan “Serving Those Who Serve” – engaged in conduct better described as self-serving. For example, the defendants tailored their sales pitch to young recruits at the lowest pay grades, including those still in basic training. Even before discussing the merchandise a customer might be interested in buying, Harris Jewelry’s salespeople were trained to push the “Harris Program,” the idea that buying on credit from the company would – regardless of the servicemember’s credit history or later payment record – improve their credit scores. In one particularly eye-catching graphic that ran until at least March 2018, the company claimed that by buying merchandise on credit through Harris Jewelry and making timely payments, servicemembers could save more than $12,000 when financing a car in the future. Salespeople allegedly made a number of other representations about the purported benefits of buying and financing through the company. If potential customers expressed reluctance about buying on credit, the defendants trained their sales staff to allay those concerns by telling consumers that they “can’t afford not to do it.”

But the FTC and the States allege that for many servicemembers, signing a retail installment sales contract with the defendants only led to negative financial consequences. In addition to burdening them with substantial payments over many months, servicemembers who missed a payment or were late in paying learned about the substantial downsides of the “Harris Program.” As one servicemember said on the company’s Facebook page, “I went to Harris . . . to build up my credit [and] all I’ve got from y’all is bad credit. So much for ‘serving those who serve.’”

That wasn’t the only allegedly illegal practice Harris Jewelry inflicted on members of the military. Once servicemembers had selected merchandise, the FTC and the States say that in numerous instances salespeople added a “Protection Plan” to retail installment contracts, without customers’ express informed consent. Ranging in price from $39.99 to $349.99, the plans covered things like ring and watch sizing and battery replacement. In many instances, Harris deleted the plan from the contract only if a servicemember insisted. According to the complaint, far more frequently customers simply paid the additional cost because they were left with the impression that it was required or because they didn’t realize the defendants had slipped in the additional purchase.

Among other things, the settlement in the case requires the defendants to stop collecting on millions in debt, refund approximately $10.9 million they took in through protection plans, ask the credit bureaus to delete negative credit entries, counterorder outstanding judgments against consumers, and stop selling or assigning retail installment contracts or other consumer debt. In addition, Harris Jewelry must directly contact consumers entitled to protection plan refunds and must post a notice on its website about how customers can get their refunds. The order also requires them to complete their shutdown of operations once they meet the requirements of the order.

What are the messages for other businesses?

Claims about credit improvement require substantiation. Companies must have solid support for all objective claims they convey to consumers. Yes, that includes product representations, but federal and state consumer protection laws extend far beyond that. If you claim that a transaction with your company will have other benefits to consumers, including improving their credit, you need proof.

Add-ons require consumers’ express informed consent. When it comes to add-on products, including “protection plans,” don’t sneak them into complicated transactions, don’t bury the terms in contracts, and don’t leave people with the impression that they’re mandatory when they aren’t. Before adding on an add-on, the most important component to add is the buyer’s express informed consent. This consumer protection fundamental shouldn’t come as a surprise to businesses. The FTC and the States have brought numerous cases over the years challenging the practice of illegally tacking on fees for unwanted “add-on” products. Just one example: the FTC’s recent action with the State of Illinois against Napleton Auto for – among other things – charging consumers for “extras” like payment insurance and paint protection without their express informed consent.

Aiming illegal sales practices at members of the military will arouse law enforcement ire. Directing unfair or deceptive tactics to any group of consumers violates the law, but targeting underhanded practices to military personnel – especially younger recruits with less financial experience – takes it to a new low.

The FTC and the States remain committed to defending the interests of servicemembers and their families. People with questions about refunds should contact the New York State Attorney General’s Office at (315) 523-6080.